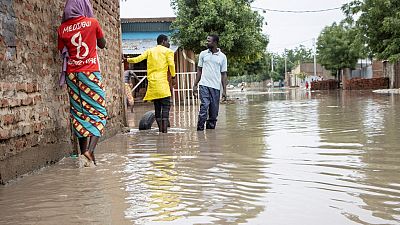 More than 340,000 people have been affected by floods in Chad since the end of June, according to a provisional UN assessment consulted Wednesday by AFP.

"The provisional toll from the floods is 341,056 people affected (55,123 households) in 11 of the 23 provinces," including the capital N'Djamena, the UN Office for the Coordination of Humanitarian Affairs (OCHA) said in a statement.

Heavy rains have been affecting this landlocked central African country for several weeks.

The "affected" people are those who have had to "abandon their homes" and who have "lost property", the Ocha office in Chad told AFP.

On Aug. 19, the U.N. Office for the Coordination of Humanitarian Affairs announced that 22 people had been killed since June in Chad because of the heavy rains.

"We cannot cope with this situation, we need more aid, that's why we are appealing to donors," said the Ocha office in Chad, interviewed by AFP. The aid needed amounts to 6.3 million dollars, and the government has only 1.1 million, according to Ocha.

According to the United Nations, by 2021, 5.5 million Chadians, or more than a third of the population of this landlocked Central African country, would need "emergency humanitarian assistance".

The situation has worsened due to the war in Ukraine, where Russia has imposed a blockade on Ukrainian grain.