Confidence is the key word in Angola's general elections slated for Wednesday, 24 August. The presence of observers is of fundamental importance for the acceptance of the election results.

2000 national and international observers have been accredited to follow the elections. Among the foreign delegations is a 29 member mission from the Community of Portuguese Speaking Countries (CPLP), headed by the former president of the Republic of Cape Verde, Jorge Carlos Fonseca.

"The CPLP does its job, that is, with the number of observers, taking into account the size of the country, the relative importance of the provinces, the constituencies, We will focus on the province of Luanda, Bengo, Cuanza Norte and Cuanza Sul", Fonseca told our correspondent João Peseiro Monteiro.

"Taking into account that Luanda, for example, has close to four million voters, a third of the voters, with samples from Bengo, Cuanza Norte and Cuanza Sul, I believe that it can give a relatively positive, objective view of what happens in the electoral process." the ex leader of Cape Verde said.

The European Union has two experts on ground for a longer mission than that of the CPLP, as they follow the process up to the possible challenge actions in the courts. Their report is never made public.

There are also national observers. In relation to other elections, Luís Jimbo from the Angolan Electoral Observatory explained that they have less support, but the accreditation was faster and they had more time for training. At the same time, several citizens are organizing themselves to verify if the results announced in Luanda, correspond to the notices posted in each polling station.

"The citizen have lost confidence in the organs of the CNE [National Electoral Commission] and they are using any means to gain confidence in the electoral result", says Jimbo. "Because there is a very low level of trust in the institutions, the citizens and especially the youth, who are about 50 percent of our voters, are creating this environment and this effort to believe in the process with something more than the official results." he stressed.

Euronews correspondent João Peseiro Monteiro reports that besides the CPLP and European experts, the African Union, the Southern African Development Community or the Carter Center of the United States are some of the bodies that are in Angola to observe the electoral process.

The elections are expected to be the closest election since the country first allowed a multi-party vote in 1992. More than 14 million Angolans are eligible to vote and will elect the president and 220 members of parliament simultaneously, with a single mark on the ballot paper. 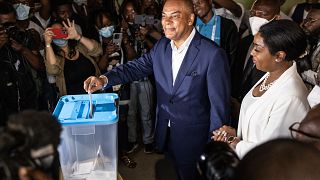