President Cyril Ramaphosa has declared a state of national disaster in South Africa. This comes a week after terrible floods left at least 443 people dead in the Durban area on the east coast.

"The cabinet met in special session last night and decided to declare a state of national disaster," the head of state said in a televised address on Monday (April 18), referring to the situation as "a humanitarian disaster".

"Tonight we are a nation united in mourning," added Mr Ramaphosa, who visited the country on Wednesday.

Some 10,000 troops have been deployed to the affected areas to assist the overwhelmed relief effort.

The week-long downpour has led to deadly floods and landslides in KwaZulu-Natal (KZN) where most of the casualties have so far been recorded.

According to the National Meteorological Institute, the rainfall has eased since the weekend and no further flooding is expected in the coming days.

Thousands of people have been displaced. Some areas have been without water and electricity since Monday. Water tankers are trying to bring in drinking water but roads and bridges are still cut off.

Homeless people are clearing the roads in exchange for a few coins from the few motorists.

Nearly 80% of the drinking water network is out of order, according to local authorities, who warned that it would take time to restore it.

For the first time on Monday, a water truck appeared in the neighbourhood of Philakahle Khumalo, a 30-year-old mother of two. She however says It was not enough, "People are desperate.

The army has deployed plumbers and electricians. Air support is being stepped up to bring in goods, and water purification systems and tents for evacuees will be set up.

Troops supported by helicopters were already present in recent days alongside police and rescue workers in emergency operations.

- The grave has been filled in -

Rescue workers remain on alert, but a week after the disaster began, hopes of finding survivors are slim.

Bodies washed away by the floods have been found upstream of dams. Families are still searching: "We can't find the body," Clyde Naicker told AFP by phone. He has not seen his brother since Monday.

Close to 50 people are still missing.

Funerals are being organised but burials are a logistical challenge. "We are digging the graves and at the time of burial the hole has filled up with water," said Nasan Chetty of the KZN Funeral Directors Association.

In the mortuaries, the authorities are trying to speed up the autopsies of the victims in the face of the massive influx of corpses. "There are so many dead people, the mortuaries can't keep up," says Pieter van der Westhuizen, director of the country's leading funeral director, Avbob.

Children are due to return to school on Tuesday after the long Easter weekend. But authorities have warned that at least 270,000 pupils will be out of school. More than 600 schools have been affected, nearly 4,000 homes destroyed and more than 13,500 damaged.

The authorities expect hundreds of millions of euros in damage. A €63 million (R1 billion) emergency fund has been released by the government after the region already suffered massive destruction in July during an unprecedented wave of rioting and looting. 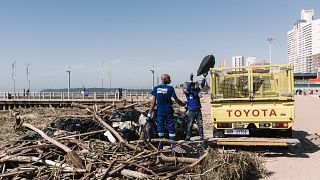