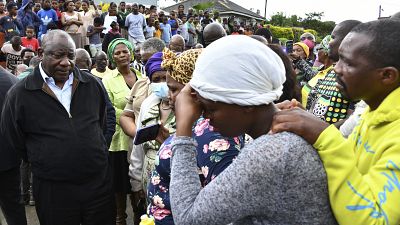 After loosing everything because of devastating floods in and around the Eastern South African city of Durban, some residents are trying to find shelter in the underground halls of hostels.

Mobheki Sokhela is volunteering in one of those places in Durban's Umlazi township and says a lot of people will have to settle on chairs or a cardboard boxes as the hostel is already full. "There is not enough space, this community hall is too small for them, but because they got no other option, they use this.", despairs the resident.

In Durban's southwestern township several houses are made of corrugated iron sheets or wooden planks and could not resist the heavy rains that swept through the area. Sinethemba Duka is queuing with dozens of others in order to enter the shelter. The 31-year-old street vendor recounts the panic of finding himself knee-deep in water when he returned home Monday night. "In 30 minutes, the water was coming, coming, coming. Then after that I started running to the which that has no water, on top. You can't be not scared when you see the big, dirty water."

According to governement figures released on Wednesday night, at least 300 people have died in what some officials describe as "one of the worst weather storms in the history of the country".

Meteorologists said on Wednesday the bulk of the storm had passed but warned "persistent rainfall and localized flooding could occur in the coming days". 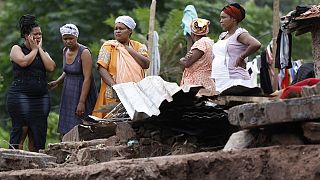 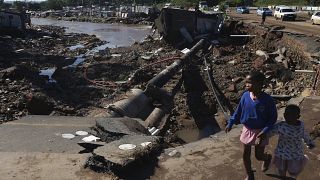