In light of the recent revelations regarding a reported "massacre" of 300 civilians in the town of Moura in central Mali, the country's military chief appeared on national television to defend his army.

In its report released on Tuesday, April, 5, Human Rights Watch says Malian armed forces known as FAMA and suspected Russian merceneries are responsible of the killing in Moura. But General Oumar Diarra denied any wrongdoing. "The FAMA has intervened in Moura, not to go and kill civilians whose responsibility it is for us to protect, we intervened in Moura as part of our regalian mission of defending the integrity of the national territory, the protection of people and their property. / As soon as the forces arrived, they were attacked by the terrorists who were in a meeting and very violent fighting ensued during which we also deplore deaths and injuries in our ranks.", said General Oumar Diarra, Chief of Staff of the Malian Army.

The Malian army had already issued a declaration saying that the report aimed to "tarnish the image" of its army forces.

"The professionalism of the FAMA was remarkable. We will continue the conduct of our operations in strict compliance with international humanitarian law and human rights. I would like to reassure the Malian population: the FAMAs are not operating against the civilian population, we are aware that the success of our operations depends on the support of this population.", continued the army leader.

The rights group says its study was based on interviews with 27 people from the area, foreign diplomats, and security analysts.

Mali has been fighting against violent jihadists groups since 2012 with the help of different foreign soldiers, including Russian fighters since last December. 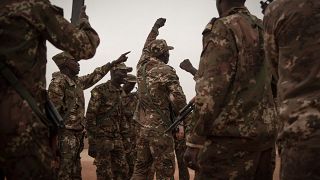