Security forces and their allies in a disputed part of conflict-hit northern Ethiopia committed abuses against Tigrayans that amounted to war crimes and crimes against humanity, two rights groups said Wednesday.

Amnesty International and Human Rights Watch (HRW) said Tigrayan civilians had been targeted in "a relentless campaign of ethnic cleansing" in the long-contested western Tigray region since the outbreak of Ethiopia's war in November 2020.

Over the ensuing months, several hundred thousand Tigrayans were forcibly expelled from western Tigray in a "coordinated" manner by security forces and civilian authorities through ethnically-motivated rape, murder, starvation, and other serious violations.

"These widespread and systematic attacks against the Tigrayan civilian population amount to crimes against humanity, as well as war crimes," Amnesty and HRW said in a joint report titled "We Will Erase You From This Land".

Over 15 months, HRW and Amnesty interviewed more than 400 people including refugees who fled into Sudan, and witnesses to the violence still living inside western Tigray and elsewhere in Ethiopia.

They documented the sexual enslavement and gang rape of Tigrayan women, including a victim whose attackers said they were "purifying" her blood. They also gathered testimony about the death of Tigrayans in overcrowded prisons, and the summary execution of dozens of men by a river.

The atrocities were blamed on newly-appointed civilian administrators in western Tigray, and regional forces and irregular militias from the neighbouring Amhara region.

Amharas and Tigrayans are two of Ethiopia's largest ethnic groups, and both lay historic claim in full to the vast fertile expanse of western Tigray that stretches from the Tekeze River to Sudan.

The United States in March 2021 said "acts of ethnic cleansing" were taking place in western Tigray. Amhara authorities dismissed the accusations as "propaganda".

But the rights watchdogs also pointed the finger at Addis Ababa, accusing the government of Prime Minister Abiy Ahmed of covering up abuses and severely restricting independent access to western Tigray.

The atrocities there unfolded "with the acquiescence and possible participation of Ethiopian federal forces", the report said.

"Ethiopian authorities have steadfastly denied the shocking breadth of the crimes that have unfolded and have egregiously failed to address them," said Kenneth Roth, executive director of HRW.

Western Tigray was swiftly captured by federal and Amhara forces, and a new administration appointed.

HRW and Amnesty said local officials banned the Tigrayan language from use, displayed signs around towns ordering Tigrayans to leave, and denied access to farmland and humanitarian aid.

Eritrean troops -- allied with Ethiopia in the fight against the TPLF -- joined Amhara forces in looting crops and livestock, and driving Tigrayans from their homes, the rights groups said. Thousands were rounded up and held in grim detention camps where deaths occurred: "Some died as a result of torture, denial of medical care, and lack of food and water; guards killed others," the report said.

Untold numbers of civilians have died, and fighters on all sides have been accused of grave atrocities against civilians. Addis Ababa declared a "humanitarian truce" last month, while the rebels agreed to a "cessation of hostilities" on the condition that aid reach Tigray.

Some supplies has since reached the stricken region but humanitarian groups say it is nowhere near enough given the hundreds of thousands facing starvation across Tigray. 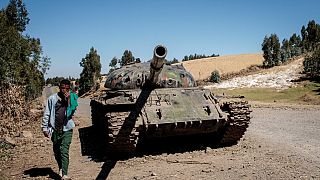 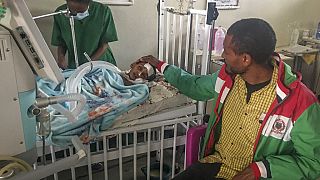