The dead include five members of the same family in the Angoche coastal area of Nampula province, Governor Mety Gondola said. The number of injured is now at least 50, the prime minister’s office announced.

Gombe is the most recent of a series of cyclones that have hit southern Africa so far this year. The cyclones have highlighted how

Most of the fatalities occurred when the cyclone first hit Mozambique's northern coast on Friday last week and its strong winds and rains caused many houses to collapse, said the official update.

Some coastal districts in Nampula province remained isolated on Monday, without power, water and communication.

In total, more than 100,000 people were forced from their homes by the strong cyclone, according to official figures. About 12,000 houses were totally destroyed while 11,000 were seriously damaged.

In terms of public infrastructure affected, two bridges have been destroyed, 16 health units and 113 schools have been reported damaged. More than 140 power lines have been knocked down, according to official figures.

On the historic island of Ilha de Moçambique, six people died and the cyclone toppled several trees that were centuries old. Due to widespread flooding, many residents are desperate and the local government is using boats to provide relief as it is not possible to reach people on foot or by car, Ilha district administrator Momade Ali, told state television TVM.

“The situation is more dramatic because some spaces that we had already prepared as reception centers have also been affected,” he said. “There are families hosting about 40 to 50 people in their homes,” he added.

Cyclone Gombe weakened over the weekend but continued to batter northern and central Mozambique with rain and strong winds. Virtually all rivers in the area have reached alert levels and many roads have become impassable. 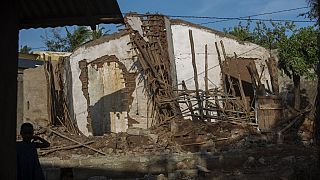