The scene has become all-too-common during Ethiopia's drawn-out war: thousands of Eritrean refugees, shell-shocked and separated from loved ones, fleeing on foot through harsh terrain to escape artillery and gunfire.

It played out again this month, after the Bahrale refugee camp in the northeastern Afar region sustained what survivors described as a brazen assault by rebels from neighboring Tigray.

At least five people were killed and an untold number of women kidnapped.

Those lucky enough to escape are now scattered across Afar, awaiting an uncertain future in a country they once saw as a haven from their repressive homeland.

Yet in other respects, the incident followed a familiar pattern -- one analysts say highlights failings of the Ethiopian government, the rebels and the international community at large.

It has also renewed debate on how to accommodate one of the most vulnerable groups in Africa's second-most populous country.

"I just can't emphasise enough how unprecedented this is," said Sarah Miller, senior fellow with Refugees International, highlighting the "scale and scope" of abuses against Eritreans during every stage of the 15-month war.

"Ethiopia is no longer a safe place for Eritrean refugees –- that's quite clear."

Eritrean refugees have a long history in northern Ethiopia, first arriving in 2000 towards the end of a two-year border war that killed tens of thousands.

Before the current conflict broke out, some 113,000 Eritrean refugees were registered in Tigray and Afar, according to the UN.

Most were fleeing the authoritarian rule of President Isaias Afwerki.

Early in the conflict, refugees at two camps near the border faced abuses -- including killings, rapes and looting - at the hands of Tigrayan rebels and Eritrean soldiers that Human Rights Watch has termed "evident war crimes".

Those two camps were ultimately destroyed in what one aid group called a "rampage" after the area came under Eritrean control.

Since then, refugees there have faced extended cuts to food and medical aid, and three were killed in a drone strike in January.

The attack on the Bahrale camp began February 3, part of a broader offensive in Afar that diplomats say represents the latest setback to hoped-for peace talks.

"Heavy weapons were thrown into the refugee camp and Tigray forces controlled the area. The same day they started looting property," recalled one survivor, according to testimony collected by an aid agency and shared with AFP.

"They kidnapped some refugee women, we do not know where they are," said the woman, who became separated from her sister and nine-year-old son.

Hundreds of Bahrale refugees have sought shelter at the Agda Hotel in Afar's capital Semera, gathering under cardboard boxes or spindly trees in the courtyard to shield themselves from the sun.

"For three days we had no kind of food or water, but because of our fear we weren't thinking about that at all," Abdu Ahmed told AFP.

A TPLF spokesman dismissed claims that its fighters attacked refugees as "lies".

Of 34,000 refugees registered in and around Bahrale, fewer than half –- 14,250 –- have been accounted for, UN refugee agency spokesman Neven Crvenkovic told AFP last week.

Ethiopia plans to house them in a "temporary site" in Serdo, 40 kilometres (25 miles) northeast of Semera.

But attempts to establish new sites elsewhere in the country have moved slowly.

Refugees told AFP they were heartbroken about having to flee Bahrale but resigned to their circumstances.

"If God took my family and my home from me, I don't have anyone to ask about it, I will accept it," said Halima Kedir, who has located just one of her eight children since the attack.

For Miller, from Refugees International, the Eritreans' plight highlights broader failures to protect civilians during a war that has killed thousands and, according to the UN and the US, driven hundreds of thousands to the brink of starvation.

"The humanitarian community has a lot of reckoning and deep thinking to do around what's been going on in Ethiopia," she said. 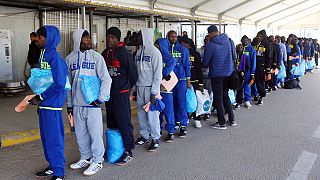