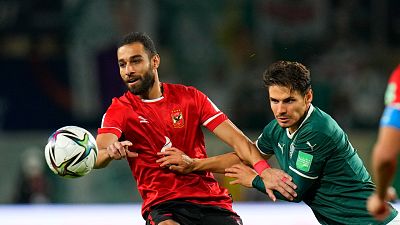 The Red Devils faced the Brazilians of Palmeiras whom they had beaten last year to take the third place in the tournament.

This time the Egyptians could do nothing as they were twice beaten by the South American champions.

The two goals were scored by Raphael Veiga and Dudu.

The men of South Africa's Pitso Mosimane were counting on the return of six unfortunate finalists of the last AFCON that ended last weekend with Senegal claiming victory.

Mohamed Sherif, who had just returned from Cameroon, thought he could revive his team's fortunes at the end of the match but his goal was disallowed as an offside.

Ayman Ashraf, who was left on the bench in the AFCON final was sent off for a violent tackle.

Al Ahly will now face either Chelsea of England or Al Hilal of Saudi Arabia.