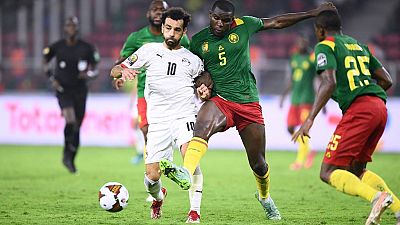 Cameroon coach Toni Conceicao has described their semi-final penalty shoot-out defeat at the Africa Cup of Nations as the "harsh reality of sport".

Indomitable Lions players and fans are yet to come to terms with this "harsh reality" after being beaten 3-1 by Egypt on penalties on Thursday.

The hosts, who were hoping for a sixth African cup win is now fighting for third or fourth position with Burkina Faso on Saturday.

"The goal was to win this trophy, unfortunately, we failed," goalkeeper Andre Onana said.

"It's hard when you see the way we failed because I think we were better than them. We created more chances, but unfortunately, we didn't score - and when you don't score you can be in a difficult situation.

Egypt wins against Morocco to challenge Cameroon in semi-finals https://t.co/ELC3pLUMYA

Conceicao said his side "suffered fatigue" as the game wore on.

"My team tried, but Egypt managed to control our offensive abilities and countered them," adding, "That's why we were forced to penalties."

However, top scorer, captain Vincent Aboubakar is of the view that a lack of team ethic against Egypt cost his side.

"In football, you reap what you sow. We have a big team and every time we play as a team, we win," the striker said.

"In this game, everyone wanted to show what he was capable of and here is the payoff. Whenever we are collectively strong, we win but the moment everyone tries to do what they want, we miss out."

AFCON: Cameroon and Burkina Faso qualify for the semi-finals https://t.co/SHxj97tcRp

Cameroon missed three of their four spot-kicks in the shoot-out, with Egypt keeper Gabaski saving from Harold Moukoudi and James Lea Siliki, before Clinton N'Jie side-footed wide when needing to score.

"His timing was wrong, his run-up was short," Toure said.

"It seems to me like Cameroon did not prepare for penalties.

"When I was with Ivory Coast, after each session we had a training shoot-out. It did not look like they had done that.

"As soon as they missed one, there was pressure and more pressure. And you see with N'Jie, I don't know what was going through his head."

However, Conceicao insisted that every Cameroon player practised penalties after every training session, whether at the Nations Cup or not, and that players reacted differently in front of a crowd.

"The players that missed their penalties are young lads," Lauren, 45, added.

"You see the centre-back, with his head down. He was facing the ball straight and his body language told you he was going to miss."

As the fall-out from their exit at the hands of Egypt continues, Cameroon will have to move on quickly from the events at the Olembe Stadium.

The central Africans face Algeria in a two-legged play-off in March for a spot at the 2022 World Cup.

"We have big games soon, against Burkina Faso and then against Algeria, and we have to be focused on that and forget about this result," midfielder Andre-Frank Zambo Anguissa said.

Sebastien Bassong, another former Cameroon international, described their defeat on penalties as "heart-breaking".

"The Egyptian side were on a mission and were really composed," the 35-year-old former Tottenham and Norwich defender told the BBC World Service.

"Defensively, they had a game-plan and knew what to expect. They executed their plan and delivered. 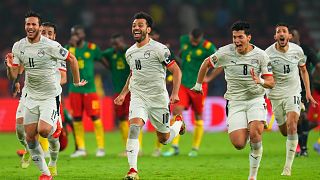