On Monday afternoon, the Capetonian fire brigade was once again deployed to contain the fire threatening to consume South Africa’s parliament.

Under the eyes of Capetonians, a dozen firefighters were using a crane lift to direct their hose towards the roof of the 19th century building that houses the South African National Assembly. On Sunday, the fire was believed to have been brought under control however it flared up again.

Jermaine Carelse, the spokesperson for Cape Town's fire & rescue service recalls the moment when his firefighters had to resume their battle against the blaze: "I think that was before five when the crews alerted us to a fire in the roof void. At that time there were only about six fire engines and about thirty personnel at the scene. It's a little bit challenging for the guys due to the slope of the roof as well as the wind fanning the fire continuously."

The blaze first broke out on Sunday in the wood-panelled older part of the building which houses South Africa's first parliament and some of the nation's most cherished artefacts. It then ravaged the new assembly where legislators currently meet.

A suspect was arrested by Cape Town authorities on suspicion of arson, theft and housebreaking on Monday. The 49-year-old man is expected in court on Tuesday. 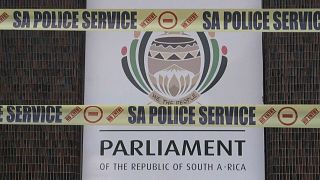 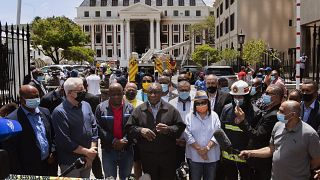 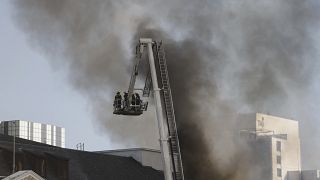