Fear, tension and anxiety can best describe the emotions of residents here at Lalibela since August when a column of haggard-looking rebels entered Lalibela during an afternoon prayer service, prompting worshippers to cry out "God save our city!"

Indeed God came through for them through Father Tsige.

"With the help of our Father Tsige, not a single bullet was fired towards the churches. They respect him, and destruction did not happen because of him." A member of the church, Tsige Abebe explained.

Father Tsige, administrator of the Lalibela monastery feared the worst for the 11 mediaeval rock-hewn churches that make Lalibela. He however had faith that nothing would happen at the holy place urging his flock to keep calm and stay home.

Government-allied Amhara militia, Eshete Zewudru said; "The people were suffering and humiliated, and they lived under a burden. They have started to move freely and come outside after the (government-allied) militiamen and Amhara Special Forces who arrived here and celebrated by firing shots in the air."

A Wounded government soldier, Aliyu Ahmed was happy to have heard "we had conquered Lalibela, even though I was injured. The people were also overjoyed when the Special Forces captured the city."

Prior to this, rebels were reported to have looted homes and health facilities. While residents lost touch with the outside world due to cuts in transportation, electricity, banking and communications.

The ordeal ended only last week when the army retook Lalibela as part of a lightning-fast counter-offensive –- the latest dramatic shift in Ethiopia's unpredictable 13-month war.

AFP was the first independent media outlet to reach the city, a UNESCO World Heritage site, where Father Tsige is now taking stock of the suffering while seeking sola

Abiy, winner of the 2019 Nobel Peace Prize, promised a speedy victory when he sent troops into Ethiopia's northernmost Tigray region to topple the TPLF in November 2020 -- a decision he said came in response to rebel attacks on army camps.

By late June however, the TPLF had staged a shock comeback, reclaiming most of Tigray before moving into neighbouring Amhara and Afar.

Lalibela was one of many Amhara localities where government soldiers chose to flee instead of fight. Local officials followed, leaving church leaders to administer the rebel-controlled city as best they could. Their first act was to confront combatants who had placed heavy weapons near the churches.

The TPLF fighters, many of them Orthodox Christians themselves, responded positively, removing the weapons and vowing to respect the site.

They also began leaving their Kalashnikovs outside before descending to pray in the Church of Saint George, an iconic excavation shaped like a cross.

However, in the city itself, the rebels were less accommodating, knocking on homes at all hours and demanding mobile phones and food, residents told AFP. 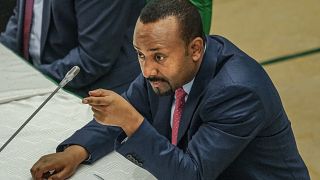