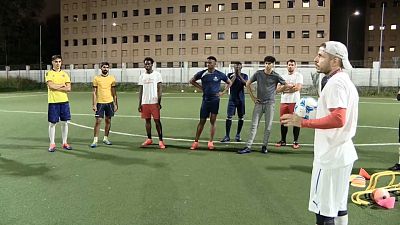 Football against racism. For this small football club in Milan, this is not a glossy spot featuring world-famous rich footballers, but the very reason for its existence and the main idea behind its foundation.

Saint Ambroeus is the first football team composed of refugees and migrants coming from outside the European Union to be affiliated to the Italian Football Federation in the North of Italy.

“We are a multi-ethnic, working-class football team and we try to be both a social and football point of reference in the city of Milan. We use football as a way of integration, social, exchange and knowledge and, on top of that, a very valid way to fight racism,”  Daniele Raduazzo, Sporting Director of St. Ambroeus (St. Ambrogio) said.

The club was founded 5 years ago with the mission to give migrants and refugees a chance to make friends and to integrate into society, but it’s been fighting against the Italian laws regulating their stay in the country since then.

“While on one hand, the Italian Federation was very enthusiastic about our affiliation, on the other hand, we have to deal with laws that go beyond the football federation; these laws have shaped the approach of the Italian State towards migration over the last 30 years and they are repressive" and liberticidal laws,” Davide S Salvadori – President of St. Ambroeus said.

When they are on the pitch, they are not riders or security staff anymore, but defenders and forwards for their team – they are not refugees, but footballers who play for the colors of their club.

“Here we have black and white people, white with black. There are people from Mali, Senegal, Guinea, or Cameroon, there are a lot of countries, a Moroccan too. We all play together,” Ssa Doumbia, a player at St. Ambroeus said.

This football club holds a firm place in its local area and in the whole city of Milan: migrants and refugees now play in the same squad with Italians living in the neighborhood and they can also attend Italian language courses to boost their integration process.

Definitely not just a flashy spot, but the actual essence of grassroots football.