Anger and disappointment in the Gambia after the announcement on Sunday of the unlikely coalition between the party of former leader Yahya Jammeh and that of his successor Adama Barrow, seeking a new mandate in December.

Human rights defenders see this as a betrayal to the victims of Yayah Jammeh's 20 years of rule. A sentiment shared by Hamid Adiamoh, Editor-in-Chief of the NewDay newspaper in the Gambia.

"Do not forget that this is the party that decided at that time and held the position that Barrow will not be president of The Gambia. This was a party that held the position that the Gambia would not move forward from that era of the tyranny of Yayah Jammeh. This was a party that actually brought the country to its knees and it was ready if it had the opportunity to burn the country down, you know, just to keep in Yayah Jammeh in position. So it's understandable that people feel betrayed, that the president will just five years later try to get into bed with this same political party," Hamid Adiamoh said.

The agreement stipulates that Jammeh's APRC party will be part of Adama Barrow's next government after the December 4 elections. The party's spokesman also spoke of a possible return of its leader.

"Barrow would be completely mistaken to bring in someone as domineering, as overbearing as Yayah Jammeh into the country so soon, I do not think he's going to make that mistake," Hamid Adiamoh said

He added, "Secondly, the members of the APRC themselves do not want him back in the country. They do not because towards the end of Yayah Jammeh's reign, he was already turning against his friends and his own associates, and I am sure that APRC members actually enjoy their own freedom without Yayah Jammeh."

Critics fear that the alliance between the APRC and the NPP will deny victims their right to justice.

"So what you're seeing right now is just politics simply. The APRC guys need to be able to convince APRC voters that we are negotiating for the return of Yayah Jammeh in order to win their votes. That's all. And once the election is over and Barrow is back as president, everybody is going to forget about Yayah Jammeh," Hamid Adiamoh said 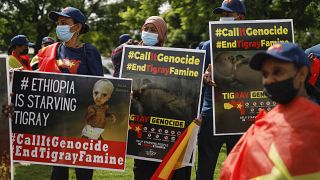