Tigray: AU calls on Ethiopia to do more for humanitarian aid 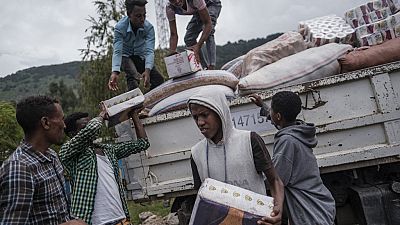 The African Union (AU) on Friday called on the Ethiopian government to do "more" to allow the delivery of humanitarian aid to Tigray, which has been in the grip of violent conflict for the past ten months, and "ensure that the population does not starve".

"We know that the Ethiopian government is doing its best, but we want more to be done to ensure that people do not starve," AU Commissioner for Political Affairs, Peace and Security Bankole Adeoye said Friday. "Women and children (must) not continue to be victims of a conflict that is not of their own making," he added.

Northern Ethiopia has been the scene of heavy fighting since November, when Prime Minister Abiy Ahmed sent the army to Tigray to remove the dissident regional authorities of the Tigray People's Liberation Front (TPLF).

He said the intervention was in response to attacks on federal military camps orchestrated by the TPLF. The 2019 Nobel Peace Prize laureate had predicted a quick victory, but the conflict has stalled, plunging the region into a severe humanitarian crisis.

At least 400,000 people are living in near-starvation conditions in Tigray, according to the UN. In recent months, the fighting and humanitarian crisis has spread to the neighboring regions of Afar and Amhara, where 1.7 million people are now facing hunger.

For months, humanitarian organizations have been lamenting the lack of free access to the population. On Thursday, the UN's acting humanitarian coordinator for Ethiopia, Grant Leaity, warned of a "de facto blockade" that poses the risk of "famine and high levels of mortality". Ethiopian authorities and pro-TPLF rebels accuse each other of obstructing the delivery of aid and starving the population.

On Thursday, a spokeswoman for Abiy Ahmed assured that the government was working to facilitate access, but "the violent behavior and violent nature of the TPLF is making (things) very difficult for humanitarian actors," said Billene Seyoum.

Bankole Adeoye also urged both sides "to come to the table" for negotiations. The conflict is a sensitive issue for the AU, which is based in the Ethiopian capital Addis Ababa.

Abiy Ahmed has rejected calls from the pan-African organization's envoys for talks with the tiger leaders since the conflict began, sticking to his line that it is a "law and order" operation. The TPLF accuses the organization of "bias" in favor of the authorities in Addis Ababa.