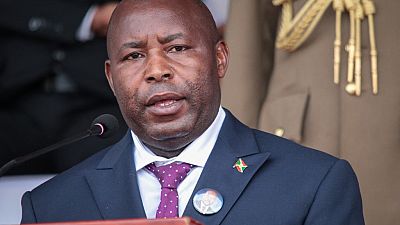 Reporters Without Borders condemned the "serious and dangerous remarks" made by Burundi's president, Evariste Ndayishimiye, against an RFI journalist whom he accused of tarnishing the country's image with a gloomy picture of the Covid-19 situation.

"We condemn these serious and dangerous remarks, a sad reminder of the fragility of press freedom in Burundi," said Arnaud Froger, head of RSF's Africa office, in the statement.

"We recall that the work of journalists is absolutely essential during this health crisis and call on the president not to make the wrong enemy by fighting the epidemic rather than journalists," he added.

RFI protested in a statement against these "verbal attacks" and "unfounded and absurd" accusations against the journalist.

The Burundian Union of Journalists expressed its "dismay" at the "repeated attacks" by the head of state against journalists.

Esdras Ndikumana, who also works for AFP, is living in exile after being tortured by Burundian security forces in August 2015, among other things.

President Evariste Ndayishimiye, who was elected in June after the sudden death of Pierre Nkurunziza, attacked Esdras Ndikumana by name on Tuesday during a stadium speech, accusing him of wanting to "destroy" Burundi.

"Someone who spends his days and nights saying that hospitals are full of cases of coronavirus, that people are dying en masse, is he not an agent in the service of poverty?" said the Burundian leader, who made similar remarks on August 19.

Burundi is, along with Eritrea and North Korea, one of the few countries that have not launched a vaccination campaign against Covid-19.

According to the latest official statistics, the country -one of the poorest in the world- has recorded 5,723 cases of coronavirus and eight deaths since the start of the pandemic.

In 2016, Esdras Ndikumana had been accused by Bujumbura of "promoting crime and violence" in his coverage, which earned him threats on social networks.

Burundi is ranked 147th out of 180 countries in RSF's press freedom index.