Partial lockdown from Thursday in Tunis capital -- a decision taken by Tunisian authorities on June 20 as, over the past month, the number of coronavirus infections and related deaths in North African country has reached record levels i.e. its highest daily rate since the onset of the COVID-19 pandemic.

Four regions in the nation’s interior -- the governorates of Beja (north-west), Siliana, Zaghouan (north) and Kairouan (centre), are particularly affected by the health crisis and will hence be on full lockdown.

Some coronavirus patients have been transferred from beds to wheelchairs as Tunisian hospitals struggle with an influx of new cases and staff shortages. This intense pressure persists despite the set-up of a military care facility with beds, monitoring equipment and ventilators on the outskirts of Tunis.

Many health workers state that the lack of staff is the real need but even accepting volunteers from the general public is tricky as their level of immunization is not easily determined.

Tunisia's already negatively impacted tourism sector -- which the North African nation has been hopeful of reviving towards the growth of its pandemic hard-hit economy, is once again feeling the effects of the current state of health affairs in light of the surge in cases and consequential coronavirus-prevention restrictions.

Gatherings such as collective prayers, public celebrations, sporting and cultural events are prohibited until July 14 in the four regions of Greater Tunis -- as well as in the seaside cities of Sousse and Monastir (east).

Cafes and restaurants will only be allowed to serve takeaway orders or terrace meals and the 8 pm to 5 am curfew has been extended.

Tunisia currently has one of Africa's highest coronavirus infection rates -- seeing a record 5,921 news cases or 420,103 cases since March 2020

The nation also reports a record number of new deaths with the continent's s highest toll per capita at 116 as of June 29 -- bringing the total to 14,959,

According to a statement from the Ministry of Health, 584 people are currently in intensive care.

The country has vaccinated only 1.8 million people out of a population of 12 million, of which 549,000 were vaccinated with two doses, mainly due to lack of doses which Tunisia's foreign minister has steadily requested from international programme contributors. 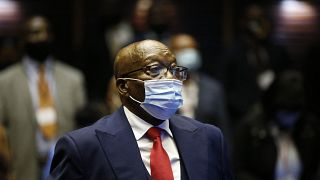