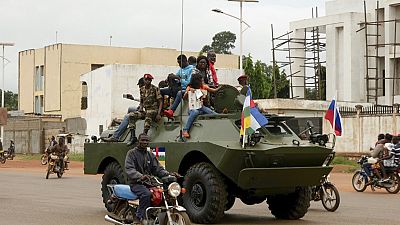 Russian instructors sent to the Central African Republic have carried out "indiscriminate killings," lootings, and occupied schools, according to an annual UN report, though Moscow says they are unarmed and not involved in fighting.

The testimonies detail excessive force which amounts to violations of international humanitarian law, the report by UN experts submitted to the Security Council recently and seen by AFP on Monday said.

Such violations "by FACA soldiers [Central African armed forces] and Russian instructors included cases of excessive use of force, indiscriminate killings, the occupation of schools and looting on a large scale, including of humanitarian organizations," it says.

The experts received "numerous reports of cases of indiscriminate killings against unarmed civilians by Russian instructors," the report said, noting their presence in the mining regions of the Central African Republic.

While on April 18, Moscow acknowledged the deployment in the Central African Republic of "532 instructors" and claimed that this number "had never exceeded 550," the experts "noted that several sources estimated that this figure was considerably higher, ranging from 800 to 2,100.

This estimate does not include 600 additional Russian instructors whose deployment was announced to the UN in May by the Central African Republic.

The experts cited "multiple testimonies from both local and FACA sources that instructors deployed included individuals who identified themselves as nationals of Libya, the Syrian Arab Republic and other countries," the report said.

Numerous testimonies from multiple locations also "noted the active participation of Russian instructors in combat operations on the ground, many having observed that they often led rather than followed FACA," the report also states.

The document also details abuses committed against civilians by the Coalition of Patriots for Change (CPC), which was created at the end of 2020 and brings together several armed groups controlling large parts of the country and determined to topple the Central African government.

The Kremlin on Monday strongly rejected the claims that Russian military instructors in the Central African Republic have been involved in killing civilians and looting homes.

When asked about the report, Kremlin spokesman Dmitry Peskov categorically denied the assertion.

“Russian military advisers couldn’t take part and didn’t take part in any killings or lootings," Peskov said in a conference call with reporters. "This is yet another lie.”

During a heated discussion at the U.N. Security Council last week, the United States, Britain and France accused Russian military contractors of committing human rights abuses in the conflict-stricken country.

The mineral-rich Central African Republic has faced deadly interreligious and intercommunal fighting since 2013. A peace deal between the government and 14 rebel groups was signed in February 2019, but large-scale violence has continued.

The country's Russia-backed president, Faustin Archange Touadera, won a second term in December's election but he has continued to face resistance from rebel forces linked to former President Francois Bozize. Russia has deployed military advisers in CAR training its military at the invitation of the government.

The Western powers linked the Russian personnel in CAR to the notorious Wagner Group, a private security company allegedly tied to Yevgeny Prigozhin, a businessman who has been indicted in the United States on charges of meddling in the 2016 presidential election.

Companies linked to Prigozhin also have reportedly secured lucrative mining contracts in CAR. In 2018, three Russian journalists were killed in CAR while investigating Wagner's activities there and no suspects have been found.