Photos released to mark International Albinism Awareness Day have gone viral in Cameroon. And Lucie Memba Boss, the actress behind the campaign hopes that they spark a conversation around the plight of persons with albinism in the central African country.

The photos show five persons with albinism lying on their backs and facing up. Memba, who has a normal skin tone is lying down with them.

"What brought me closer to persons with albinism was a campaign that famous photographer Alain Ngaan had done a few years ago and he had invited me to participate. I took a photo with two little albino girls, and I imagined myself as their mother," said Memba.

Albinism, a rare, non-contagious, genetically inherited condition found in both men and women, presents as a lack of melanin pigmentation in hair, skin, and eyes, causing vulnerability to the sun and bright light.

As a result, almost all people with albinism are visually impaired and are prone to developing skin cancer.

International Albinism Awareness Day is held every June 13. This year's theme is 'Strength Beyond All Odds'.

In southwestern Cameroon, persons with albinism are often the subject of superstitious practices and violence, stigma, discrimination, and exclusion.

In Malawi and Tanzania, they have been subjected to horrific violence prompting international outrage.

While numbers vary, the United Nations estimates that in North America and Europe one in every 17,000 to 20,000 people have some form of albinism, but in sub-Saharan Africa, the figure is higher.

One in 1,400 Tanzanians have the condition, and in Zimbabwe and select populations in other specific ethnic groups in Southern Africa, the prevalence rises to as high as one in 1,000.

"Despite these obstacles to well-being and security, leaders of organizations representing persons with albinism continue to work hard to support the most vulnerable," said United Nations chief Antonio Guterres. 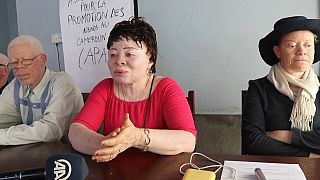