After the 2019 Zimbabwe Premier League concluded in December that year, football players and fans looked ahead to the next campaign in March 2020.

The onset of the unprecedented global COVID-19 pandemic called for a ban by the government on all sporting activities in Zimbabwe.

The coronavirus-prevention move has seen the income of many professional athletes in the country disappear. In particular, football players have been badly hit.

As such, unsanctioned social soccer 'money games' -- where teams play high-risk fixtures for a cash pot, have sprung up across the nation.

These games are often played on poor surfaces and with little social distancing.

The football players find themselves between a rock and a hard place as they make the hard decision to expose themselves to injury and coronavirus in order to feed their families.

Devon Chafa, a professional player at Ngezi Platinum FC, expresses the players' right to play in these games while emphasising the importance of staying safe.

"Our contracts, they stipulate that we don't have to play those games. So I would advise to... for me to say they cannot play it's a lie. They will play, but they have to take precautionary measures."

The governing body, the Zimbabwe Football Association (ZIFA) has condemned participation in 'money games' on the basis that they are breaking the country's laws to prevent the spread of the coronavirus and are also in breach of ZIFA's code of ethics.

The Zimbabwe Football Association (ZIFA) has condemned participation in the 'money games' -- deeming them both unlawful and a breach of the governing body's code of ethics.

Pressure on Zimbabwe's footballers to partake in these unofficial 'money games' will most likely continue until league football resumes. 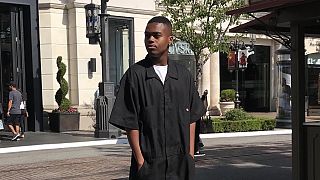