African leaders have paid tribute to Britain's Prince Philp's, who died on Friday at the age of 99.

In a press conference with Spain's Prime Minister, Senegal's President Macky Sall said of the Duke of Edinburgh:

"I would like to salute the memory of his Highness, Prince Philip of Great Britain, who has died. I present my condolences to the Queen Elizabeth II, as well as to the British people."

Zimbabwe's President Emmerson Mnangagwa expressed his condolences in a Tweet, saying "may his soul rest in peace."

Prince Philip was born in Greece and served throughout the Second World War. He is famed for his deep sense of public duty

"His Royal Highness Prince Philip has been a towering symbol of family values and the unity of the British people as well as the entire global community."

The news everywhere to be seen on Kenyan TV and people expressed support.

It was in Kenya where the royal couple learned Elizabeth's father had died and she was now Queen.

Their lives changed after that and he ended his career in the navy.

Nigeria's President Muhammadu Buhari said he was a "global icon". In a statement, he said the Commonwealth will remember the prince "for generations to come".

The head of the World Trade Organization Dr Ngozi Okonjo-Iweala praised him for founding the Earthshot Prize council, an environmental award that she is involved with.

Meanwhile in Malawi, although his passing is sad, people said the focus should be on his life.

"It is sad yes because we have lost a life but then looking at the age he was, I guess it's a celebratory thing. We need to celebrate the Prince's life and no need for crying," said  Lilongwe resident Maxwell Kalulu.

Buckingham Palace said  in a statement: "The Royal Family join with people around the world in mourning his loss." 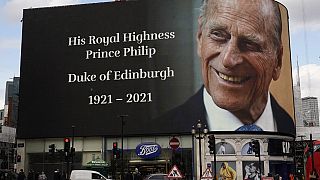