A commission that spent nearly two years plumbing France's role in 1994's Rwandan genocide concluded Friday that the country reacted too slowly in appreciating the extent of the horror that left over 800,000 dead but cleared it of complicity in the slaughter.

The report said that France bears "heavy and overwhelming responsibilities'' in the drift that led to the killings, which principally claimed victims from Rwanda's Tutsi ethnic minority.

Persistent claims that France under then-President Francois Mitterrand did not do enough to stop the genocide have damaged the Franco-Rwandan relationship since the 1990s.

As a result, French President Emmanuel Macron ordered the 15-member commission in May 2019 to shed light on what happened in Rwanda between 1990 and 1994.

Interestingly enough, the report further excluded any "complicity in genocide'' by the French, saying there was no evidence of an intention to carry out genocidal actions.

Vincent Duclert, President of the Commission of Historians on the Role of France in Rwanda, shares his stance:

"The French authorities pursued a policy that was totally disconnected from reality, a policy that bore the stigma of colonisation, ultra-ethnicist, that did not actually see that Rwanda could get out of it and basically accentuated the ethnic crisis, aligned itself with the regime of President Habyarimana, which was a racist regime, that did not succeed in removing Habyarimana from the extremists.

"France was blind, France refused all the warnings, it is indeed a big problem but if we are to consider that there is complicity in genocide, it means that basically, the whole international community will be complicit in this genocide."

Macron hoped the document would allow a catharsis, enabling France to put to rest claims that had simmered for more than a quarter of a century.

Jessica Mwiza, vice-president of the association Ibuka France, doubled down on the role of France in the genocide against the Tutsis in Rwanda.

"These terms "overwhelming responsibility", "failure", it's not something new in fact. It's good if political discourse takes these terms into account, it changes a lot because there is a lot of denial, particularly in France, due to the presence of genocide perpetrators and their families on the territory, so the fact that politicians are finally taking these strong words into account can only be a good thing because it allows this feeling of impunity to be reduced."

It's unclear to what extent the report would succeed in improving relations between France and Rwanda, and in particular, satisfy Rwandan President Paul Kagame -- who has been extremely vocal about what he perceives to be France's complicit role in the violation of the human rights of the citizens of his country. Including protection on french soil of believed perpetrators of this violence.

The Rwandan government said in a statement later Friday that it welcomes the report as an important step toward a common understanding of France's role in the genocide.'' It said an investigative report commissioned by the Rwandan government will be released in the coming weeks. 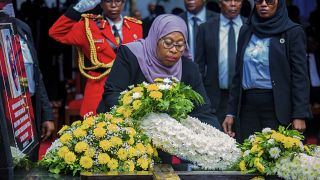