The presidential election on Sunday 21 March in Congo-Brazzaville "must be held in peace, transparency and respect for the rules of the game", said Saturday the former rebel leader Pastor Ntumi, who took up arms after the re-election of President Denis Sassou Nguesso in the previous election in 2016.

The election "must not be an opportunity to reawaken the old demons of division," added Frederic Bintsamou, alias Pastor Ntumi, as he received some 20 journalists in Mounkala, a town between Brazzaville and Pointe-Noire, in the Pool region, which is considered the agricultural breadbasket of Congo-Brazzaville.

Seven candidates are running on 21 March, including the incumbent president Sassou Nguesso, 77 years old and 36 in power.

The former rebel leader's party, the National Council of Republicans (CNR), "is not presenting any candidate and is not supporting any candidate," he added. "The candidates for the election must show love, greatness, patriotism and fair play.

Pastor Ntumi, 56, took up arms after the disputed re-election of President Sassou Nguesso in March 2016.

The regular forces had counter-attacked in a closed-door conflict that had displaced 140,000 people, according to humanitarian sources. The authorities finally announced a ceasefire just before Christmas 2017.

Pastor Ntumi regretted certain shortcomings in the implementation of the ceasefire agreement.

"It provided for a special status to be defined for me and for me to be assigned a guard of 30 soldiers. But, until today, nothing has been done. It is because my security is not assured that I do not circulate throughout the Pool and beyond," he said.

Pastor Ntumi rejected the accusation that he was playing into the hands of the government in the run-up to the elections.

"I swear to God. I have never been in league with President Sassou (...) Except that we are building peace together," he said.

The former rebel leader presented to the press the construction site of a hospital that he says he is building "for the people of the area".

"It should already be finished but we don't have enough money to go ahead," he said. 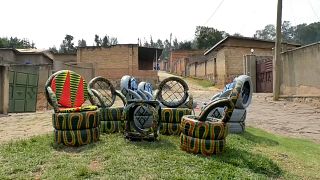