He is the hero whose story inspired the film 'Hotel Rwanda' but On Wednesday the trial began for Paul Rusesabagina, who faces terrorism charges.

He is praised for saving some 1,000 ethnic Tutsis during Rwanda’s 1994 genocide.

But is a staunch critic of longtime President Paul Kagame and faces 12 charges, including terrorism, complicity in murder, and forming or joining an armed group.

Rusesabagina's family says he has no chance at a fair trial and that the 66-year-old could die from poor health behind bars.

His outside legal team said last month that his prescribed medication for a heart disorder was being withheld.

Rusesabagina's reported worsening health, limited access to an independent legal team, and circumstances around his arrest have drawn international concern.

He mysteriously disappeared during a visit to Dubai in August and ended up in Rwanda- where he was arrested and paraded in handcuffs. His family said Rusesabagina would never voluntarily visit Rwanda again.

“This is a charade,” one of Rusesabagina’s daughters, Carine Kanimba, told The Associated Press ahead of the trial.

“They kidnapped him. It is a violation of due process and international law. He should be released immediately and unconditionally.”

He holds Belgian nationality and is a US resident.

In 2005 he was awarded the US Presidential Medal of Freedom,

But now He faces 13 charges, including terrorism”, complicity in murder, and forming or joining an armed group.

He will face trial with 20 alleged rebel fighters. Rwanda asserts that civilians in the country’s southwest died in 2018 and 2019 because of groundwork planned by Rusesabagina.

It is not clear how long Rusesabagina would stay in prison if convicted. 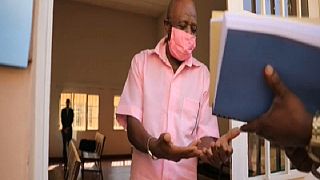