Chad's Moussa Faki Mahamat was re-elected the chairperson of the African Union Commission on Saturday during the two-day summit.

With no one else in the running, it comes as no surprise.

Faki got 51 votes out of 55 with three abstentions and one other member being ineligible to vote. His victory is the highest in the AU's history.

He will be deputised by Rwandan banker, Dr Monique Nsanzabagwana

Under new rules, a chairperson and deputy cannot be of the same gender.

But the duo will face a tough test as Africa battles the coronavirus pandemic, which has infected more than three million people.

The continent was not as badly hit compared to the United State and Europe during the outbreak in March, but many African countries are now battling damaging second waves and are under pressure to procure sufficient vaccine doses.

While vaccination programmes have begun in some countries on the continent, it has been much slower than in wealthier nations, and health experts and political leaders have warned that “vaccine hoarding” by wealthy nations is putting lives at risk in African countries.

Ahead of the **AU's summit Faki said:**“There is a vaccine nationalism on the rise, with other rich countries jumping the queue, some even pre-ordering more than they require.”

Meanwil, South African president Cyril Ramphosa told the bloc’s summit that more needs to be done especially access to loans on favourable terms despite resources from the IMF and World Bank.

Another priority for the AU will be managing conflicts in the Sahel, Ethiopia's Tigray and Mozambique. 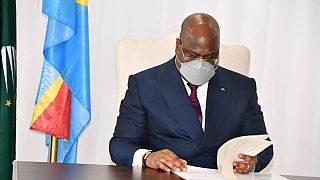