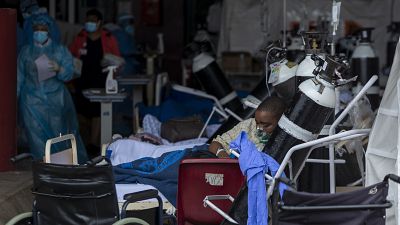 The Nigerian government says it will construct 38 oxygen plants across the country as President Muhammadu Buhari has now approved about 17 million dollars for the project meant to address the demand for medical oxygen.

The West African country's COVID-19 cases have skyrocketed to over 1,000 infections in the last few weeks amidst a second wave of the pandemic.

Finance Minister Zainab Ahmed told a meeting of the National Economic Council, Wednesday that the construction of the new plants was necessitated by an increase in the number of patients in need oxygen.

In a statement, the government said it had earmarked an additional $671,000 for repairing existing oxygen generation facilities in five hospitals.

The authorities have said that the situation was critical though the number of Covid-19 patients in need of oxygen support is unclear.

Oxygen shortages are common in Nigerian public hospitals leading to the death of some patients.

According to the Lagos State Commissioner for Health, Prof Akin Abayomi,_ "a large number of patients who are currently on admission in the isolation centres who aare largely dependent on oxygen. A patient with a critical case may use about six cylinders of oxygen in 24 hours"_ Abayomi explains.

In the commercial capital Lagos, the epicenter of Nigeria's outbreak, demand for oxygen at one of its main hospitals had increased fivefold in recent weeks to 350 6-liter cylinders a day according to the state government.

It adds that the figure by the end of January was expected to double to 750.