With the nationwide ban on the sale of alcohol going into effect in South Africa from Tuesday, some locals in Johannesburg affiliated with the bar and restaurant industries are torn between the necessity to combat the coronavirus health crisis and the need to sustain their own livelihoods.

Joshua Mudau, a local creative director in the city, expressed his stance on the new measures.

"The government hasn't given sufficient support for workers, for industries that are affected by it. So as much as I support the safety, I also criticise the government for not having planned and being so corrupt before the virus that they did not use that money to save us."

Arthur Kapenda, a local restaurant manager, shares his experience with the curfew.

"For us in terms of business it isn't good because we would have been full by this time, customers coming in. And then obviously we are observing the 50% capacity, but now it's slightly lesser than that because everybody is scared. Everyone wants to go home at exactly 8 o'clock, they want to make sure that by 9 o'clock they're at home, due to the curfew." 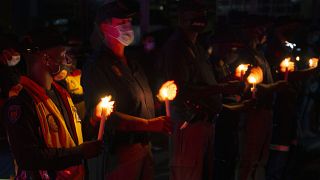