It's the first ever Champions League final for PSG against Bundesliga giants Bayern Munich.

The team trained ahead of the match at the Estadio do Sport Lisboa e Benfica on Sunday.

The trophy was won five times by Bayern Munich. This will be their first final for the Ligue 1 team.

It would be the ninth encounter between the two teams in the Champions League - all of the previous eight were in the group stages with PSG heading their head - to - head with five wins for Bayern's three.

"That is exactly the reason I joined the club. I always said I wanted to write the history of French football. I have another opportunity to do that . Since I joined in 2017 we have experienced a number of disappointments, now we're in the final and that showed I didn't give up and nor did we give up as a team."

Bayern Munich also trained ahead of the Champions League final against PSG at the same stadium as PSG.The Bundesliga champions are looking to win their sixth Champions League title - their first one since they beat Borussia Dortmund 2-1 in 2013.They face PSG who have never won the competition and are playing their first final. 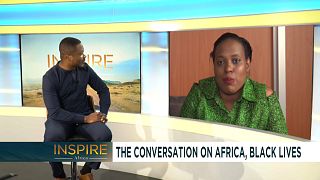 The Conversation on Africa and Black Lives [INSPIRE AFRICA]

The Conversation on Africa and Black Lives [INSPIRE AFRICA]