The Covid-19 pandemic, which initially barely had an effect on the African continent, has now reached levels that raise concern for the World Health Organization (WHO) as the spread of the virus might overwhelm the public health systems of certain countries. Even with some numbers being daunting, many Africans are not losing hope.

In South Africa, Health Minister Zweli Mkhize stated Saturday that the nation has officially recorded more than half a million confirmed cases with more than a third in Gauteng province, where Johannesburg and Pretoria, the country's economic and administrative capitals, are located. SA accounts for more than half of the cases in Africa and is currently the fifth-worst affected country in the world with a low mortality rate of 1.6%, according to their Department of Health.

In the face of the explosion of contamination, schools have just been closed again for a month and a night curfew has been re-established.

Namibia has the highest daily infection rate on the continent with a confirmation of 10 deaths and more than 2000 cases mainly concentrated in Walvis bay where the army has opened a field hospital to handle the influx of patients.

Schools are closed as a pandemic safety measure; but paradoxically, the country’s borders will be open to tourists from Monday as a way to save the tourism industry on the verge of collapse.

A COVID-19 treatment centre was installed in the sports palace of the city and currently houses 60 doctors handling between 80 to 90 patients per day.

Nigeria has officially reopened places of worship requiring the congregation to be at only 50% capacity and strongly suggesting that the elderly stay home.

The return of highschoolers to class has been postponed by a week, in the Democratic Republic of Congo, as the government seeks to give extra time in the setup of COVID-19 protection measures and quell any potential strikes by schoolteachers.
President Félix Tshisekedi has also declared that there will be no blank fiscal year.

The pandemic is still far from over on the continent but Africans are not yet done in the effort to eradicate the presence of the virus in the Motherland. 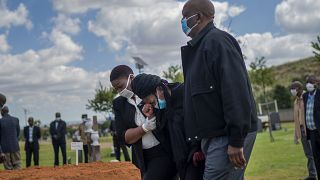 Africa Still in the Thick of Pandemic

Africa Still in the Thick of Pandemic