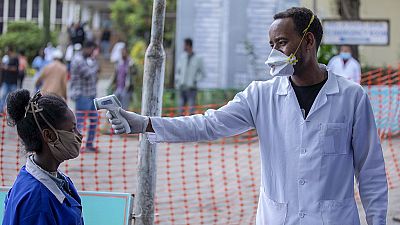 Ethiopia is currently one of East / Horn of Africa’s most impacted nations relative to rate of COVID-19 case growth and infection.

Addis Ababa has crossed the 10,000 mark as Ethiopia’s caseload goes past the 15,000 mark according to Health Ministry statistics as at close of day July 28.

The regional breakdown as presented by a situation dashboard managed by data analyst Haruna Asefa showed that the capital was the runaway most infected region in the country. 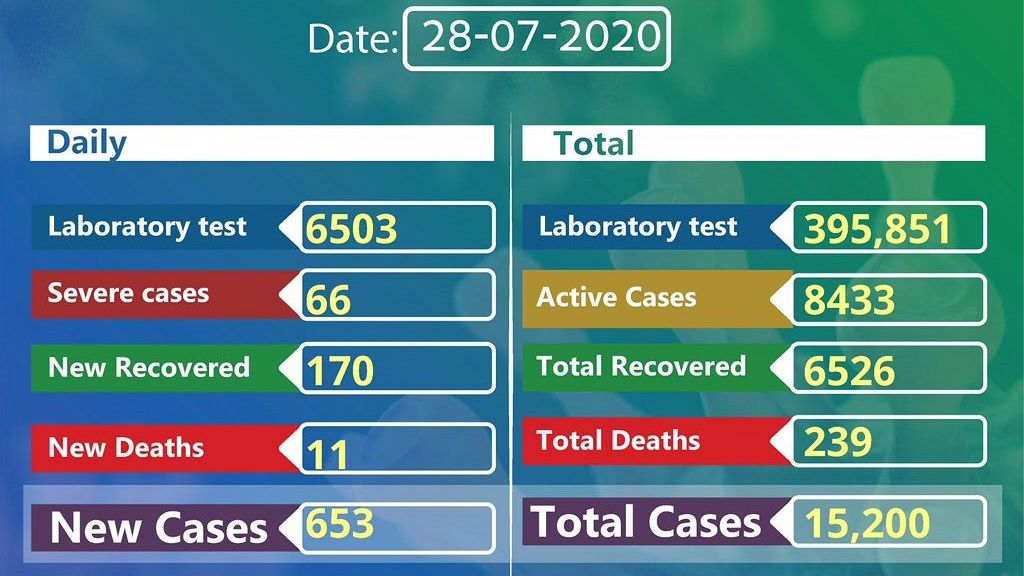 Ethiopia reported 760 new cases of COVID-19 as of today July 24. The biggest single-day figure since the index case was recorded.

The figure brings the caseload to 12,693. The Ministry of Health also reported 3 more deaths, bringing the death toll to 200.

Another 140 patients also recovered bringing the recovery tally to 5,785. Ethiopia has so far conducted 364,322 laboratory tests. 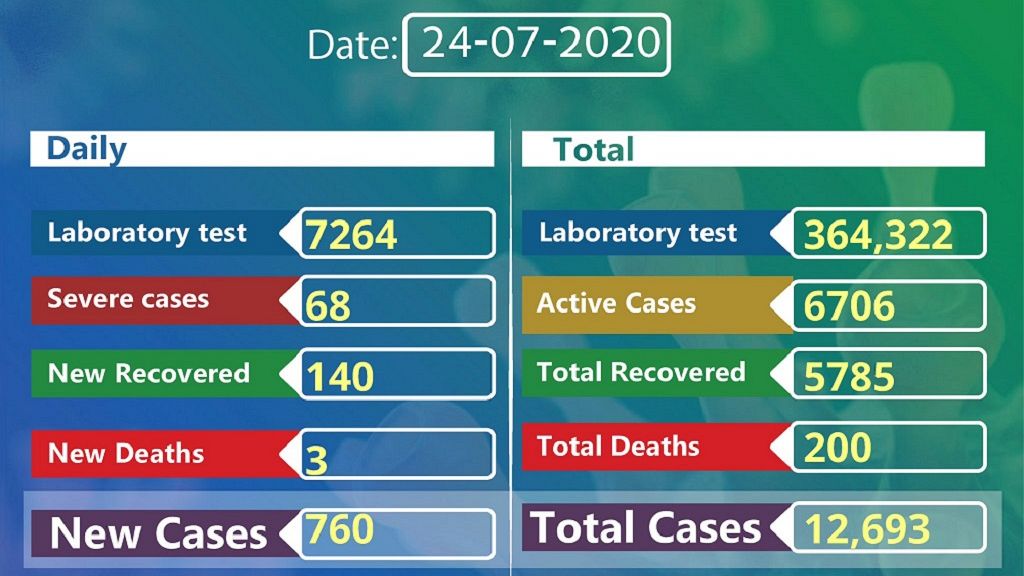 Ethiopia’s caseload passed 10,000 mark on Sunday (July 19) according to statistics from the Health Ministry. The 704 new cases reported became the highest single-day increase so far.

This brings the total number of confirmed cases in the country to 10,207. According to a data tracking website dedicated to stats from the country, the capital Addis Ababa has over half of all confirmed cases.

Ethiopia’s virus statistics updates has halted – at least from official sources – but the country has been feeding figures to the World Health Organization Africa region.

The last updates from the Health Minister and other agencies was on July 29, the day a famed musician was murdered and for which reason the internet was cut since then. Connectivity has not been restored as at time of this report – the tenth straight day of the outage.

Below are the figure updates as supplied by the WHO Africa office via social media. The WHO says it only reports verified figures as received from official sources.

Ethiopia has not released coronavirus statistics since June 29 when cases were at 5,846 with 103 deaths, 2430 recoveries and 3,311 recoveries.

The main sources of updates, the federal Health Ministry, Minister Lia Tadesse and the Ethiopia Public Health Institute have all not posted updates since June 29. Neither the WHO Africa regional office or the Africa Centers for Disease Control and Prevention have also updated stats since Monday.

The development could likely be because of an internet blackout in the country in the wake of the murder of a popular musician Hachalu Hundessa in the capital Addis Ababa.

Four days since the incident, the country has experienced deadly protests as people demanded justice for the murder. Police reported blasts in the capital whiles the army was deployed to quell violence.

#InternetShutdowns deny people their fundamental rights to freedom of expression & access to information.

Since June 30, the Ethiopian government has cut off its citizens from each other & the rest of the world with a blanket blackout. #KeepItOnhttps://t.co/WmF3BjQpA0

The case load has reached 5,846 according to official health ministry stats released today. Five more deaths took the toll past the 100 mark. Four out of the five had samples taken from the deceased for testing.

Minister Lia Tadesse posted a rundown of the national situation on Twitter celebrating the encouraging number of recoveries, which stands at 2,430; and the rate of increment of cases which she said was “more or less stable.”

On the other hands, she stressed that numbers are rising whiles reiterating the issue of galloping community transmission and the rising incidence of severe cases and deaths.

The country’s election body has also stressed that it will not hold any election across the country till the pandemic is no longer a public health threat. The position was in response to the northern Tigray regional state that asked for assistance to hold its local elections.

To curb this, we have to abide by the health rules, ALWAYS!#WearFaceMask#Distancing#HandHygiene#StayHome unless you really really have to!

The government has revised the quarantine period for persons entering the country from fourteen to seven days, the Ethiopia News Agency reported on Friday.

The decision to slash the period by half according to Minister of Peace Muferiat Kamil was because of challenges given the trend of the virus as well as the fact that the maturity period of patients has now been known to be between 6 – 7 days.

Muferiat added that the remaining seven days will be followed by self-isolation at home with full cautions assisted by health experts, the portal added.

The Minister who is also Coordinator of the COVID-19 National Ministerial Committee said the committee also passed a mandatory decision that those who come from abroad must have certificate which shows they tested negative for COVID-19 conducted 72 hours before arrival.

A person who does not have the certificate will be put in quarantine for 7 days and additional 7 days at home.

On the subject of deaths, the government will now allow respective relations to bury deceased whiles observing necessary protocols but that those with no families will be buried by the government.

…for #COVID19 patients who require oxygen and/or mechanical ventilation for treatment. The details of this treatment protocol will be made available soon,” lia_tadesse pic.twitter.com/hq9fr5LTGv

Ethiopia’s case load looks set to enter the 4,000 zone as 195 new cases took the tally to 3,954 confirmed cases, the 100th update from the Health Ministry disclosed.

Recoveries meanwhile are also closing in on the 1,000 mark. 85 new recoveries took the tally to 934, there are 65 deaths so far recorded.

#Ethiopia: In just 2 days 229 #COVID19 patients have recovered in , significantly contributing to the 22% overall recovery rate.

A total of 268 new cases within 24-hours took Ethiopia’s tally past the 3,000 mark. The current case load stands at 3,166. Eight more deaths took the overall toll to 55. Recoveries are currently standing at 495. 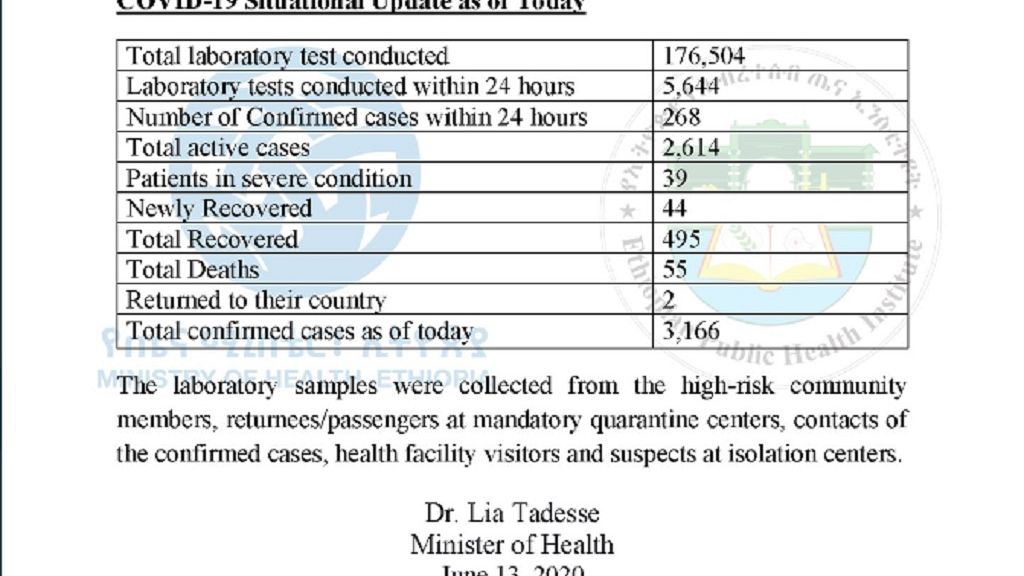 “The number of COVID-19 cases are increasingly rapidly due to the presence of community transmission. Anyone of us can be the next person to acquire COVID-19, but we can prevent it if we act now.

“Therefore, let’s support one another in this pandemic, reminding others of the recommended preventions that could save their lives. We need to practice all the COVID-19 prevention methods in order to stay alive and healthy,” the statement reiterated.

Today, 249 Ethiopians came from Kuwait to their motherland, Ethiopia. The images are very touching ? pic.twitter.com/0fKfS1zIbr

Ethiopia crossed the 2,000 mark on Sunday when 86 new cases took the tally to 2,020. The country joins the region’s top infected nations, now only behind Kenya, Djibouti and Somalia.

Today, PM Abiy addressed the new opening of parliament addressing a range of issues around the government response to the COVID-19 pandemic. Among others, he defended the decision of the national flier, Ethiopian Airlines, to continue flights to many countries- including China.