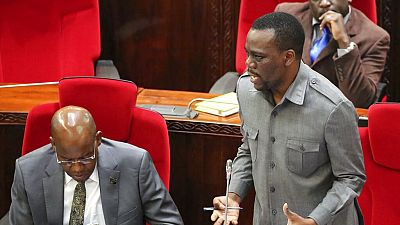 One opposition leader was shot 16 times and fled the country. Another had his leg broken by unknown assailants and his newspaper was shut down. A third, the country’s most prominent, has been banned for a year from making so-called “seditious statements,” or what others might call dissent.

But he’s speaking out anyway. With Tanzania facing an October election that President John Magufuli hopes to win, opposition leader Zitto Kabwe tells The Associated Press he’s trying to unite the opposition behind one candidate for the best shot at an upset.

And his party just attracted a potential candidate, former foreign minister Bernard Membe, who left the ruling party that has been in power since independence.

Magufuli’s administration, however, has set up one obstacle after another. In 2016 it barred opposition groups from political gatherings, and there’s no sign it will be lifted for campaigning. Human rights groups say that ban has no legal basis.

Politics are behind the attacks on opposition leaders and multiple arrests, rights groups say. And now the coronavirus is a threat after Magufuli declared it defeated in the East African nation. His government stopped updating the confirmed number of cases in April. The president has refused to shut down the economy or bar any kind of gatherings — except the political ones.

Kabwe, the leader of the Alliance for Change and Transparency party, the country’s fastest growing political party, has been arrested 16 times since Magufuli came to power in 2015. “The best weapon against a dictatorship is speaking up,” he told the AP.

This week Tanzania’s registrar of political parties added more pressure, threatening to deregister or suspend Kabwe’s party and accusing it of flouting rules by mixing religion and politics.

Kabwe called the accusations “flimsy” and told supporters not to worry because the registrar is barred from deregistering a party in the 12 months before an election.

Kabwe says he “crossed the Rubicon” and became more outspoken after opposition leader Tindu Lissu, deputy leader of the CHADEMA party, was shot 16 times in 2017.

“I decided and said this should not continue,” he said. “The state wants us to keep quiet, they threaten us. The best weapon for us is to speak up and radicalize even more.”

Now his task is persuading Lissu and CHADEMA leader Freeman Mbowe, who was attacked in June by unidentified assailants, to join forces in the election against the ruling Chama Cha Mapinduzi party.

Lissu has announced he will run against the president, but he remains in Belgium. Mbowe has picked up a nomination form, which suggests he will run, too.

Kabwe said that in Tanzania, where whoever gets the most votes wins the election outright, a united opposition has the chance at an upset. Magufuli won the 2015 election with 58% of the vote.

“I have been across the country and the feeling of the people is just change,” Kabwe said. He said past efforts to form a united front had failed because of “selfishness,” giving no details.

On Wednesday, Kabwe told reporters his party was in talks with CHADEMA to front a single candidate and he will not vie for that position. Instead, he will support whoever emerges after the two parties choose their candidates in the coming weeks.

Talks with CHADEMA are at an “advanced stage,” he said. He also warned the election won’t be free and fair, pointing out that Magufuli appoints the members of the electoral commission. And independent media houses have been banned or had their licenses suspended.

But the opposition cannot boycott this election regardless of the obstacles, Kabwe said. Boycotting could make the situation in Tanzania worse as Magufuli’s allies would have no challenge for seats in the legislative assembly or local assemblies.

Ruling party delegates this month unanimously endorsed Magufuli to run for a second term. Some even want him to go beyond the two-term limit.

The president, although criticized over repressive measures, has won some support for his much-publicized fight against corruption, though some in the opposition question its effectiveness. Magufuli also celebrated when the World Bank this month reclassified Tanzania upward as a lower-middle income country.

Parliament speaker Job Ndugai has said they will force Magufuli to pursue further terms “whether he likes it or not.” Amnesty International warns the October election will take place in a climate of fear as restrictions tighten.

“Already, organizations such as the Legal and Human Rights Centre and Tanzania Human Rights Defenders Coalition that have previously convened local organizations on election observation or monitoring human rights in the context of elections have been barred by Tanzania’s government from playing these roles,” researcher Roland Ebole said.

Kabwe said he and other like-minded people will continue fighting. “We will call for electoral and political reforms while conducting our politics. There is no way apart from that in order to save our democracy,” he said.