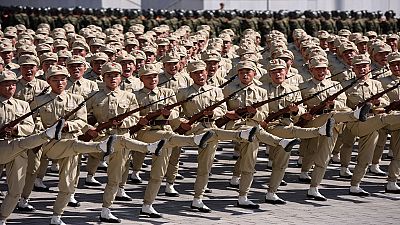 <p>North Korea blew up an inter-Korean liaison office on its side of the border on Tuesday, the South’s Unification ministry said, after days of increasingly virulent rhetoric from Pyongyang.</p> <p>“North Korea blows up Kaesong Liaison Office at 14:49,” the ministry, which handles inter-Korean relations, said in a one-line alert sent to reporters.</p> <p>The statement came minutes after an explosion was heard and smoke seen rising from the long-shuttered joint industrial zone in Kaesong where the liaison office was located, Yonhap news agency reported citing unspecified sources.</p> <p>Its destruction came after Kim Yo Jong, the powerful sister of North Korean leader Kim Jong Un, said at the weekend: “Before long, a tragic scene of the useless north-south joint liaison office completely collapsed would be seen.”</p> <p>Since early June, North Korea has issued a series of vitriolic condemnations of the South over activists sending anti-Pyongyang leaflets over the border — something defectors do on a regular basis.</p> <p>Last week it announced it was severing all official communication links with South Korea.</p> <p>The leaflets — usually attached to hot air balloons or floated in bottles — criticise North Korean leader Kim Jong Un for human rights abuses and his nuclear ambitions.</p> <p>Analysts say Pyongyang may be seeking to manufacture a crisis to increase pressure on Seoul while nuclear negotiations with Washington are at a standstill.</p> <p>Earlier Tuesday, North Korea’s army said it was “fully ready” to take action against the South, included re-entering areas that had been demilitarised under an inter-Korean agreement.</p> <p>“North Korea is frustrated that the South has failed to offer an alternative plan to revive the US-North talks, let alone create a right atmosphere for the revival,” said Cheong Seong-chang, a director of the Sejong Institute’s Center for North Korean Studies.</p>