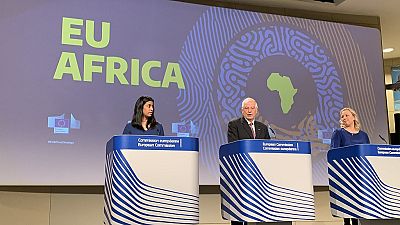 Concerned about the growing influence of China, Russia and the United States in close neighbor Africa, the European Union on Monday launched what it called a new “comprehensive strategy” for relations with a continent whose population is forecast to double by 2050.

Launching six months of consultations between the 27-nation bloc and African countries, the EU’s executive commission said its strategy will focus on climate change, developing the computer-based digital economy, economic growth and employment, security and good governance and migration.

The EU hopes African leaders will sign on and endorse the strategy at a summit in Brussels in October. EU trade in goods with Africa was worth 235 billion euros ($269 billion) in 2018, almost twice that of China’s trade with Africa and around five times that of the United States.

We have no inferiority complex. We are involved, and we are going to continue to be and our presence will, without doubt, be accompanied by not just investment, but also the desire to be partners in the political, economic and cultural development.

#Africa is Europe’s closest neighbour. To strengthen our ties with our sister continent, the EU proposes five key partnerships. With the new #EUAfricaStrategy we can pursue common goals together. #EUAfricaPartnership ?EU_Commission europeaid pic.twitter.com/sBcwtz45n2

European foreign direct investment in 2017 stood at 222 billion euros ($254 billion), more than five times the figure for either of the other two major powers.

“We have no inferiority complex. We are involved, and we are going to continue to be and our presence will, without doubt, be accompanied by not just investment, but also the desire to be partners in the political, economic and cultural development” of Africa, EU foreign policy chief Josep Borrell said.

“It’s about making progress in a shared partnership. I don’t know if that’s China’s point of view,” he said. The strategy is short on detail and largely a list of political ambitions.

But Africa is a major source of unauthorized migrants entering Europe. The section on migration underlines the need for better cooperation on the return to Africa of people not eligible to stay, and tighter border controls.

Northern Africa, and notably the Sahel region, has also proved fertile ground for extremist groups. The strategy aims to strengthen security cooperation and help solve long-term crises in countries like Libya, Mali or Somalia. No new funds or security help were announced Monday.