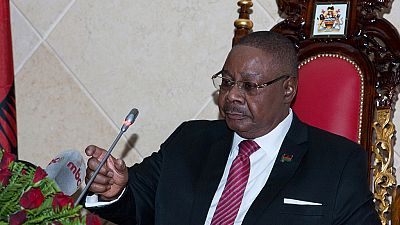 <p><strong>Malawian president Peter Mutharika’s ruling Democratic Progressive Party (<span class="caps">DPP</span>) on Tuesday entered into an alliance with United Democratic Front (<span class="caps">UDF</span>).</strong></p> <p>The <span class="caps">UDF</span> governed Malawi between 1994 and 2004, and has 10 parliamentary seats. The <span class="caps">DPP</span> has 61 while the main opposition Malawi Congress Party has 55.</p> <p>The <span class="caps">UDF</span> is led by Atupele Muluzi, who served in Mutharika’s government before last May’s presidential election. </p> <h2 style="font-size:16px;">Date for fresh polls set</h2> <p>This coalition comes a day after Malawi’s parliament set May 19 as the date for a fresh presidential election after a court overturned last year’s vote, citing widespread irregularities.</p> <p>Parliament on Monday also amended the Electoral Act, another of the Constitutional Court’s orders. The amended law allows for a runoff election within 30 days if no candidate receives a majority of votes.</p> <p>Mutharika and the electoral commission of the southern African nation have appealed the court ruling.</p> <p>Mutharika has 21 days to decide whether to approve parliament’s decisions.</p> <p>The ruling early this month was the just the second time that a court in Africa had nullified the results of a presidential election, after a Kenyan court did so in 2017.</p> <p>The decision followed months of sometimes violent unrest as some in Malawi called for the head of the electoral commission to step down.</p> <p>Parliament has recommended that the current electoral commissioners be replaced.</p>