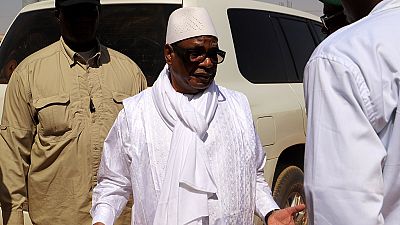 Mali’s president Ibrahim Boubacar Keita on Monday confirmed that his government is in talks with jihadist insurgents, an option that had been long rejected even as conflict deepened in the West African country.

The disclosure comes as the Malian government said that it had dispatched troops to the key town of Kidal that has become a symbol of its lack of control over the country’s beleaguered north.

“The number of deaths in the Sahel is becoming exponential and it’s time that certain paths be explored,” Keita said in an interview with French media broadcast Monday, referring to a dialogue with militants.

Mali has struggled to contain a jihadist revolt that broke out in north of the country in 2012 and which has killed thousands of military and civilian lives.

Despite the presence of foreign troops, the conflict has also since spread to central Mali, as well as neighbouring Burkina Faso and Niger, inflaming ethnic tensions along the way.

But despite rising violence, dialogue with jihadist leaders such as Amadou Koufa and Iyad Ag Ghali has long been considered beyond the pale for the government in Bamako.

It had been suggested before. The International Crisis Group urged the government in May last year to open a dialogue with jihadists.

And earlier, in 2017, a national conference gathering of Keita’s party and opposition parties urged holding direct talks with jihadists as a way out of the crisis.

But the government did not follow up on those recommendations at the time.

In the interview, Keita appeared to have changed course on past refusals to engage jihadists.

“We are ready to build bridges for dialogue with everyone… at some point, we have to sit around a table and talk,” he said.

He added that he had sent former president Dioncounda Traore “on a mission” to find people who “could be sensitive to a discourse of reason”.

Traore is the government’s representative in central Mali, a region that has become an epicentre for jihadist attacks.

He appears to have already made earnest efforts. Late last month, Traore said that he had sent envoys to both Koufa and Ag Ghali, the leading jihadists in Mali.

“He is my high representative, so his job is to listen to everybody,” Keita said.

The president nonetheless noted that he was “not naive” about the likelihood of success.

“Those who order others to enter a mosque and blow themselves up in the middle of the faithful don’t have much of my esteem,” he said.

On Monday, Keita also announced that troops were en route towards the northern town of Kidal, which fell to Tuareg rebels in 2012.

The move is considered a step towards the government reasserting control over its vast and often lawless territory.

It is also a key component of a long-shaky 2015 peace accord between the Bamako government and some rebel groups, whose success is seen as one of the few ways to end the conflict.

Among other things, the pact provided for former rebels joining the army, which would eventually return north.

Troops made up of army regulars and former rebels have left the northern city of Gao and are now travelling roughly 200 kilometres (120 miles) north to reach Kidal, in a journey that will take several days.

The route is fraught with danger, Keita said, as Malian soldiers are regularly killed in jihadist ambushes or in roadside bomb attacks.

Other so-called “reconstituted” units of regulars and ex-rebels are expected to deploy in northern Malian cities such as Menaka, Gao and Timbuktu, after the soldiers reach Kidal.

Mali’s neighbouring governments are often wary of a rapprochement with former rebels, whom they suspect of cooperating with jihadists.

Last week, a senior officer in a pro-government Arab armed group who was involved in implementing the 2015 peace deal was gunned down by unidentified assailants not far from Gao.