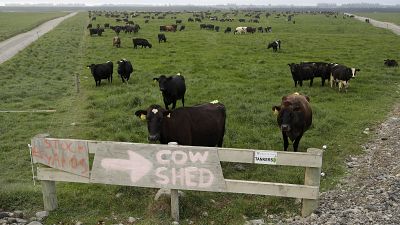 Napier grass is grown in Kenya to feed herds. Some farmers use it as mulching material for their plantations. But a new study suggests the grass may help reduce green house gas emissions in East Africa.

It provides animal fodder for cows which graze in the area, and according to a new study, it could help to improve diets, boost farm yields and reduce pressure on forests, cutting green house gas emissions.

Alice Anyango is an environmental scientist at the International Livestock Research Institute.

“When you cut down forests either to change it into crop land or for grassland for livestock then you are releasing a lot of carbon into the atmosphere which leads to climate change,” she says.

Kenya has 2 million smallholder dairy farmers whose farms have 10 cows or less.

According to a study carried out in Kenya by the Centre for International Forestry Research, Wageningen and Lancaster universities, the use of Napier grass as fodder could help reduce strain on forests.

The farmers in the study traditionally fed their livestock with wild grasses, forest grazing or with silage made from locally grown maize, supplemented with concentrated feed brought into farms during the dry season.

Researchers investigated how the cows’ diet affects the amount of methane that the livestock emits, the impact of the animals’ diet on land use and forests and the cost of producing the fodder in terms of carbon emissions.

The researchers compared three nutrient-rich diets for diary cows in Kenya: using silage made from locally grown maize, or African Napier grass. or a combination of the two.

The researchers concluded that the use of inorganic fertilizers and fodder in order to improve farm productivity increases greenhouse gas emissions.

According to Anyango, inorganic fertilizers contain nitrous oxide, a gas that is 300 times as potent as carbon dioxide.

She therefore proposes the increased use of organic manure.

The scientists also concluded that feeding cattle more nutrient-rich fodder on the farm is more efficient than letting them graze in the forest.

All three combinations of feed resulted in improved milk production per cow by between 44 and 51 percent.

However a Napier grass-only diet reduced greenhouse gas emissions by 2.5 percent, while a combination of Napier and silage only reduced emissions slightly.

The researchers say that Napier grass produces less carbon emissions per hectare than maize, but is more nutrient rich.

Jane Wambui, who’s a small scale farmer, says that ever since she started using Napier grass, her cows’ health has improved :

“It is very hard to find ticks in Napier grass because most of the time you are there cutting and so there is the reduction of diseases,” she says.

“In the old days we used to graze our livestock in the forest. However we now zero graze our cows whilst feeding them with Napier grass and the productivity has improved. I can support my family as well as my neighbors,” says another farmer, Bernard Kikwai.

After weighing up the delicate balance of carbon emissions produced by the various methods : allowing livestock to graze in forests, planting maize for livestock feed, or planting organic Napier grass, the researchers concluded that Napier grass provides the cattle with more nutrition per hectare than maize, and created less harmful carbon emissions.

However elsewhere agriculture experts at the World Bank argue that grazing cattle in woodland, often call silvopasture or agroforestry can help reduce methane emissions from farming.

More than 2.6 million trees of 80 different species have been planted as part of a World Bank scheme in Colombia, and they have sequestered more than 1.2 million tons of carbon according to World Bank data.

So far at least 32,000 hectares have been converted to silvopasture in Colombia according to the World Bank, this has increased incomes by upto $532 per hectare, per year and has boosted milk yields by an average of 36%.

As the world faces the challenges of a changing climate, farming has a major role to play in reducing emissions and much research is needed to determine what are the best practices.