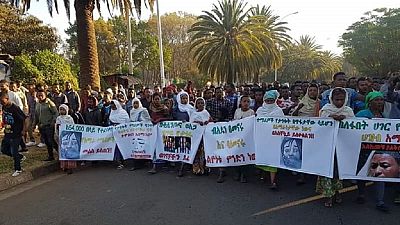 <p>After expressing their anger and making demands on social media for clarity on the abduction of some university students months back, Ethiopians thronged the streets in parts of the Amhara regional state to press home their demands.</p> <p>Local media outlets and journalists shared photos of massive protests in several towns and cities in the state. Most of the protesters carried banners denouncing silence on the part of the federal and regional governments.</p> <p>The university students in question, most of them female, who remain missing after their kidnapping two months ago were kidnapped in the Oromia region.</p> <p>#BringBackOurStudents was used by activists and citizens in making their demands. A campaign that brought back echoes of Nigeria’s #BringBackOurGirls movement over the mass kidnapping there of scores of schoolgirls in 2014. </p> <p>The Addis Standard, a privately-owned outlet reported today that the Dembi Dollo varsity which the students belonged to confirmed that <a href="https://addisstandard.com/news-dembi-dollo-uni-says-12-of-17-kidnapped-are-campus-students-investigation-unit-established/">12 of the 17 kidnapped students are from the university campus</a></p> <p>The varisty’s president was speaking to the regional governments media outlet, the Amhara Mass Media Agency, <span class="caps">AMMA</span>. Meanwhile the Minister of Peace Muferiat Kamil was in the region and held talks with the university leadership.</p> <p>The Addis Standard report further disclosed that “federal police commission commissioner Endeshaw Tasew and press secretariat of the office of PM Abiy Ahmed Negussu Tilahun as well as representatives of from the federal army and intelligence apparatus” were in the said meeting. </p> <p>“Participants of the discussion have also raised concerns that similar kidnappings have targeted business people and other civilians in the area,” it added. The police chief confirmed that an investigation was underway.</p> <blockquote class="twitter-tweet"><p lang="en" dir="ltr"><a href="https://twitter.com/hashtag/Ethiopia?src=hash&ref_src=twsrc%5Etfw">#Ethiopia</a>:Protest rallies taking place in multiple cities & twons in <a href="https://twitter.com/hashtag/Amhara?src=hash&ref_src=twsrc%5Etfw">#Amhara</a> region denouncing the kidnapping 54 days ago of 17 <a href="https://twitter.com/hashtag/DembiDollo?src=hash&ref_src=twsrc%5Etfw">#DembiDollo</a> univ students in <a href="https://twitter.com/hashtag/Oromia?src=hash&ref_src=twsrc%5Etfw">#Oromia</a>. 13 of them are female. Protesters also carried posters denouncing the federal & regional gov’ts silence. Pics:AMMA <a href="https://t.co/kiaKXmgV0i">pic.twitter.com/kiaKXmgV0i</a></p>— Addis Standard (@addisstandard) <a href="https://twitter.com/addisstandard/status/1222048534138097664?ref_src=twsrc%5Etfw">January 28, 2020</a></blockquote> <script async src="https://platform.twitter.com/widgets.js" charset="utf-8"></script> <blockquote class="twitter-tweet"><p lang="en" dir="ltr"><a href="https://twitter.com/hashtag/Ethiopia?src=hash&ref_src=twsrc%5Etfw">#Ethiopia</a> protest rallies being held in multiple Amhara towns/cities demanding the release of university students reported to have been abducted in W. Oromia. Pics by <a href="https://twitter.com/AMMAONLINE2?ref_src=twsrc%5Etfw"><code>AMMAONLINE2</a> from Bahirdar, Woldiya and Debremarkos <a href="https://t.co/VHIuu9Qrx0">pic.twitter.com/VHIuu9Qrx0</a></p>— Kalkidan Yibeltal - ቃልኪዳን ይበልጣል (</code>Kal_KidanY) <a href="https://twitter.com/Kal_KidanY/status/1222042689409077248?ref_src=twsrc%5Etfw">January 28, 2020</a></blockquote> <script async src="https://platform.twitter.com/widgets.js" charset="utf-8"></script> <p>Prime Minister Abiy Ahmed’s government has been praised for appointing women to prominent positions “but with regard to the abducted girls, in its silence, it is violating a tremendous number of their human rights,” Yared Hailemariam, director of the Association for Human Rights in Ethiopia, said in a statement Monday. </p> <p>“Ethiopian authorities have failed to protect the victims of the abduction and to take necessary measures to bring them back.”</p> <p>It is not clear how many of the students remain captive. The prime minister’s press secretary, Nigussu Tilahun, disclosed on Jan. 11 that 21 students from Dembi Dollo University were released while six remained captive. But family members say they haven’t heard from their loved ones.</p> <p>“The last time I heard from my daughter was a month ago. She said youths from the local area took them to the forest. I don’t know what happened to her since,” Yeneneh Adugna, who lives in Central Gondar in the Amhara region, told The Associated Press. “We are living in an anguish every day. We are crying every day. We want to know whether they are alive or dead. No one is giving us any information.”</p> <p>The Association for Human Rights in Ethiopia says 18 university students, 14 of them female, were seized while returning home from university.</p> <p>No one has claimed responsibility for the abduction, but Oromia regional officials have blamed the armed Oromo Liberation Army, which is clashing with government forces in the Western Oromia region. The armed group has denied the accusation and said the government itself was to blame for the kidnapping.</p>