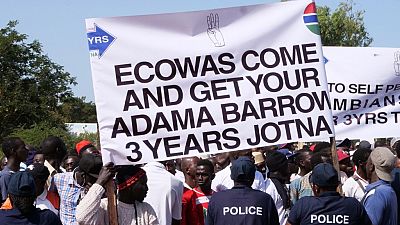 <p><strong>Gambia’s government on Sunday banned the group that has been mobilising the populace to demand departure of President Adama Barrow.</strong></p> <p>For weeks now, tension has been building in The Gambia, a tiny West African country surrounded by Senegal, over Barrow’s decision to stay in office for five years after initially pledging to step down after three.</p> <p>Police in the capital Banjul on Sunday fired tear gas at hundreds of protesters, who responded by throwing stones and setting tyres on fire, an <span class="caps">AFP</span> correspondent at the scene said.</p> <p>Police arrested 137 people at the demonstration, it added.</p> <h2 style="font-size:16px;">Banning the protests</h2> <p>The government later announced a ban on the “Three Years Jotna (is up) Movement”, the group that has spearheaded weeks of protests calling for Barrow to step down.</p> <p>In a statement, spokesman Ebrima Sankareh said the group was a “subversive, violent and illegal movement” that was “determined to illegally overthrow the constitutionally elected president”.</p> <p>The group’s president Abdou Njie was also arrested on Sunday, according to an <span class="caps">AFP</span> journalist, although the government would not confirm it was holding Njie.</p> <p>Three people were killed in Sunday’s clashes according to Kebba Manneh, director of the Serrekunda hospital where victims were taken.</p> <p>Red Cross sources said 28 people were taken Sunday to Serrekunda hospital, close to where protesters had gathered in the districts of Old Jeshwang and Stink Corner on the outskirts of Banjul.</p> <p>The government denied that any protesters were killed on Sunday.</p> <h2 style="font-size:16px;">Silencing the media</h2> <p>Among those arrested were the director of the King FM radio station, and a radio presenter who had been charged with inciting violence, a station employee told <span class="caps">AFP</span>.</p> <p>The head of another radio station, Digital FM, was also arrested and it was not known where he was being held, Saikou Jammeh, secretary general of Gambia Press Union, told <span class="caps">AFP</span>.</p> <p>Authorities later moved to shut the two stations, accusing them of serving as platforms for inciting violence and broadcasting for the anti-Barrow movement and threatening “the security of The Gambia”.</p> <p>Sunday’s clashes broke out after demonstrators tried to change their itinerary to get closer to the city centre.</p> <p>“Let’s go and burn everything that belongs to Adama Barrow and his family,” one protestor called out to those alongside him, the <span class="caps">AFP</span> reporter heard.</p> <p>“We will protest until Barrow resigns,” said another who identified himself as Amadou Sanyang. “He is a traitor who betrayed the population’s trust, we are going to teach him a lesson.”</p> <h2 style="font-size:16px;">The Jammeh question</h2> <p>On Saturday, hundreds of Gambians had marched on the outskirts of Banjul, responding to the call of victims associations demanding justice for sweeping rights abuses and murder suffered under former dictator Yahya Jammeh’s 22-year rule.</p> <p>Jammeh ruled The Gambia with an iron fist but fled in January 2017 after losing a presidential election to Barrow.</p> <p>Since January 2019, around 190 witnesses have appeared before a Truth, Reconciliation and Reparations Commission (<span class="caps">TRRC</span>) set up to investigate abuses under Jammeh’s rule.</p> <p>Last week, thousands marched to demand he be allowed to return from exile in Equatorial Guinea.</p> <p>They argued he has a right to do so under a joint statement from the African Union, the Economic Community of West African States (<span class="caps">ECOWAS</span>) and the United Nations, published at the time of his exile.</p> <p>But Justice Minister Abubacarr Tambadou warned that Jammeh would “face immediate arrest and charges of the most serious kind” if he returned, including “crimes against humanity”.</p> <p>Barrow, a relative unknown at the time, defeated former autocrat Yahya Jammeh in elections in the tiny West African state in 2016.</p> <p>“No one can force me to leave the presidency before 2021,” he said recently.</p> <p><strong><em><span class="caps">AFP</span></em></strong></p>

No one can force me to leave the presidency before 2021.