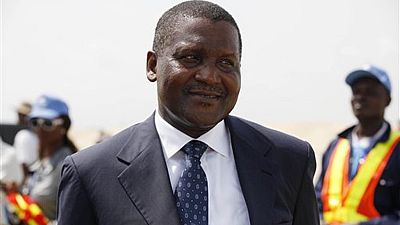 Thanks to his ever growing investments in the are of cement especially but also sugar and flour among others, Aliko Dangote, Africa’s richest man, made further profits at the end of 2019.

He is reported by the Bloomberg news portal to have raked in $4.3 billion in profits over the course of the year 2019.

The 62-year-old indigene of Nigeria’s north central Kano State has held the title of Africa’s richest for the past few years.

According to the Bloomberg Billionaires Index, Dangote ended the decade with a net worth of almost $15 billion, making him the 96th wealthiest man in the world.

This year, 2020, is a critical one for one of his biggest projects, an oil refinery and petrochemical plant by the Dangote group is expected to be launched in Nigeria’s commercial city of Lagos.

When completed it will be Africa’s biggest private refinery with analysts stressing that it will help Nigeria’s economy in many ways.

The plant has the capacity to meet more than Nigeria’s entire fuel consumption and could transform an economy that currently imports all its refined product needs. Dangote is also constructing a fertilizer factory on the same site, the Bloomberg report added.