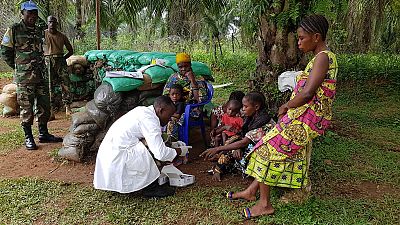 Rebels with apparent links to the Islamic State group have killed at least 43 people in eastern Congo over the weekend in a series of attacks carried out in response to a new military offensive in the area, a rights group said Monday.

Rebels from the Allied Democratic Forces in some cases went door-to-door shooting their victims dead, according to a Congolese human rights group known by its French acronym, CEPADHO.

The rebels have been trying to pit the civilian population against the army so that people demand the military action be stopped, said Omar Kavotha, president of the rights organization. Insecurity in the area already prompted demonstrators to protest late last month by setting fire to the town hall.

The deadly weekend violence targeted an area in eastern Congo that is at the heart of the Ebola epidemic, which has killed more than 2,200 people since August, 2018.

“These attacks will certainly paralyze the Ebola response teams,” said Dr. Pierre Celestin Adikey, who coordinates the effort to control the disease in the Beni region. “The movement of the population becomes difficult to control.”

Other armed groups in the area such as the Mai Mai militias also may take advantage of the insecurity to carry out attacks of their own, he said.

The medical effort to control the second deadliest Ebola outbreak in history has been severely hampered since the start by the presence of so many armed groups in eastern Congo.

Health teams have at times been unable to safely get to areas to carry out vaccinations of those at highest risk of contracting the deadly virus. Without the ability to react quickly, Ebola has continued to spread. Community mistrust of the health workers has only further deepened the problem.

The Allied Democratic Forces, or ADF, originated in Uganda and has long been a threat in neighboring eastern Congo. More recently, the Islamic State group has claimed attacks carried out by ADF rebels though the exact relationship between the two is not entirely clear.