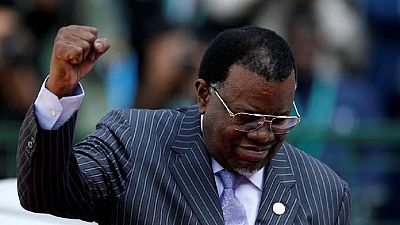 Incumbent Namibian President, Hage Geingob, was re-elected with 56.3% of the votes cast, a very sharp drop from the 86% he received five years ago.

The leader of the South West African People’s Organisation (SWAPO), which has been in power since Namibia’s independence in 1990, was well ahead of Panduleni Itula, SWAPO’s dissident candidate, who won 30% of the vote, according to election commission figures released Saturday evening.

“Democracy is the real winner,” said Hage Geingob after the declaration of results.

However, Panduleni Itula and the leader of a new opposition party, Bernadus Swartbooi’s Landless Movement (LPM), reported electoral fraud. Itula claimed that the exercise was marred by “irregularities”.

The 62-year-old former dentist, who accuses the president of selling the country’s wealth to foreigners, particularly popular among young people, came out on top in the capital, Windhoek.

“It served as a springboard for frustration and brought together all the president’s disgruntled people,” noted Graham Hopwood of Namibia’s main think tank, the Institute for Public Policy Research.

Namibia was the first African country to introduce electronic voting in 2014. The equipment has been criticized by the opposition, which claims that the absence of paper ballots increases the possibility of fraud.

The Southern African Development Community (SADC), for its part, said that the elections “were generally peaceful, well organized (…) allowing voters to exercise their democratic duty”.

The electoral commission also reported on Saturday evening that Swapo had won 65% of the seats in the National Assembly, failing to obtain a two-thirds majority. In the previous legislature, it held 80% of the seats.

The turnout was 60% for the presidential election.

Hage Geingob, 78, has led Namibia since 2014. He was re-elected but obtained the worst score ever achieved by the candidate of the ruling SWAPO party.

Despite a subsoil rich in natural resources, including uranium, seabeds rich in fish and diamonds, and the growth of tourism, Namibia has been in recession for several years.

The fall in commodity prices and a persistent drought over the past several seasons have caused its gross domestic product to fall two years in a row (2017 and 2018) and unemployment has hit a third (34%) of its population.

President Geingob’s regime is also splashed with a corruption scandal.

An investigation by al jazeera has implicated government officials of receiving the equivalent of $10 million in bribes from an Icelandic fishing company.

Minister of Fisheries and Marine Resources, Bernhard Esau, and minister of Justice, Sacky Shanghala, stepped down following the revelations.