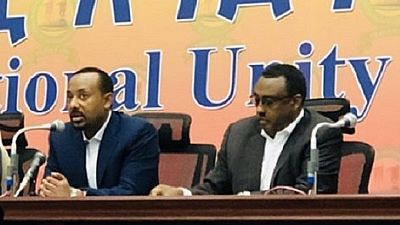 “Onwards to Prosperity!” PM Abiy Ahmed said in a tweet announcing the decision by the two parties. A third party, the Somali Democratic Party, SDP, also agreed to join PP but they are an affiliated party just like four other such parties.

The two other EPRDF partners are the Southern Ethiopia Peoples Democratic Movement, SEPDM, who also agreed to the merger. The fourth member Tigray Peoples Liberation Front, TPLF, have dismissed the merger which they have described an illegal.

The political adjustments and changes are ongoing ahead of a busy political season for the country. General elections are scheduled for next year, a process government insists will go ahead despite concerns over security and internal displacement.

In this morning’s urgent session of the Oromo Democratic Party and the Amhara Democratic Party, each of the Parties have unanimously approved the merger. Onwards to Prosperity!

The coalition’s five associate parties belong in the other semi-autonomous regions of Africa’s second most populous nation.

The satellite parties include the Somali Democratic Party (SDP), as well as parties representing the Afar, Gambella, Beinshangul Gumuz as well as Harari Regional States.