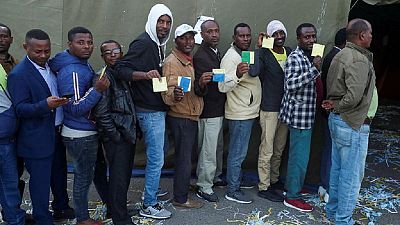 <p>Polls opened on Wednesday for Ethiopia’s Sidama people to vote on self-determination in a referendum closely watched by other ethnic groups also seeking more autonomy since reforms by Prime Minister Abiy Ahmed shook up the national power balance.</p> <p>The special vote for the Sidama, mostly based in the south and comprising about 4% of Ethiopia’s 105 million people, comes ahead of a general election next year and has brought fears of renewed violence.</p> <p>At least 17 people died in clashes in July between security forces and Sidama activists after the government delayed the poll by five months.</p> <p>Voters lined up before dawn at a polling station in Hiteta, a neighbourhood in the city of Hawassa, women carrying babies, elders wrapped in white, handwoven blankets, the gabi, and young men with traditional Sidama scarfs tied around their heads.</p> <p>Many waived their voting cards in celebration as they waited to cast their ballots when polling stations opened at 6 a.m. (0300 <span class="caps">GMT</span>).</p> <p>“I arrived early to vote as I want my own region,” said Emnet Telahun, 22, holding her one-year-old daughter Mirtinesh.</p> <p>For Yerusalem Kabiso, 48, who lost her 24-year-old brother in the July clashes, the vote meant the end of decades of struggle.</p> <p>“I consider witnessing this day as if I was borne again,” said Kabisao, who was wrapped in a pink bathrobe.</p> <p>“We lived our whole life under oppression, as a child I remember chopped heads of Sidama people displayed at the market, I will never forget the head of my brother in law,” she said.</p> <p>If the referendum passes as expected, the Sidama will control local taxes, education, security and laws in a new self-governing region that would be Ethiopia’s tenth.</p> <p>The Horn of Africa nation’s regions are emboldened by a more open political climate – and a weaker ruling coalition – since Abiy took office in 2018 and eased the iron rule of his predecessors.</p> <p>However, that has also brought a surge of long-repressed rivalries between Ethiopia’s more than 80 ethnic groups, forcing more than 2 million people out of their homes and killing hundreds, according to the United Nations and monitoring groups.</p> <p>‘DANGER <span class="caps">FOR</span> ETHIOPIA’</p> <p>“Should there be irregularities and should autonomy not be declared, that would be a danger for Ethiopia itself because of course there will be violence,” said Dukale Lamiso, head of the Sidama Liberation Front, an activist group.</p> <p>About 2.3 million voters are registered at nearly 1,700 polling stations, the national electoral board said.</p> <p>Polling stations close at 6 p.m. (1500 <span class="caps">GMT</span>). Preliminary results are due on Thursday.</p> <p>More than a dozen other ethnic groups are considering or already campaigning for region status.</p> <p>The vote will also be closely watched for its tone in the run-up to next year’s general election, which Abiy has promised will be free and fair.</p> <p>Previous elections going back to 2005 were marred by irregularities, violence and clampdowns by security forces.</p> <p>A potential Sidama homeland would be carved out of the Southern Nations, Nationalities, and Peoples (<span class="caps">SNNP</span>) region, the most ethnically diverse part of Ethiopia, a rural region of about 20 million people that borders Kenya and South Sudan.</p> <p>The Sidama people want the multi-ethnic Hawassa, 275 km (170 miles) from Addis Ababa, to be their capital.</p> <p>The city, on a lake and surrounded by farmland, is home to the country’s first industrial park, opened in 2017, where Western and Asian companies are producing clothes for export as part of Ethiopia’s ambitious industrialisation drive.</p> <p><strong><em><span class="caps">REUTERS</span></em></strong></p>