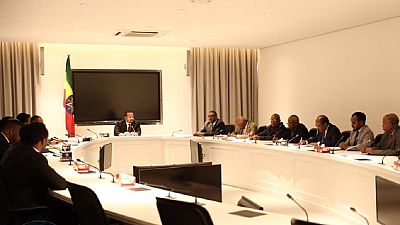 Ethiopia Prime Minister Abiy Ahmed on Thursday met with leadership of political parties in the Oromia and Amhara regions.

The meeting held at the PM’s offices comes on the back of security issues bedeviling the two regions. Oromia, Abiy’s home region, was rocked by deadly violence in October leading to 86 deaths according to official records.

In the past week, deadly violence has rocked universities in both regions forcing authorities to deploy the army to contain the incidents.

Abiy’s deputy, Demeke Mekonnen, an Amhara, was part of the meeting. Defense Minister Lemma Megerssa, a former leader of the Oromo bloc, was also present.

A leading opposition figure in Oromia, Dr. Merera Gudina, was also part of the Oromo leadership that met to discuss issues.

A leading Oromo activist, Jawar Mohammed, commenting on the development has lauded the move stressing that dialogue was important between especially Oromia, Amhara and Tigray regions.