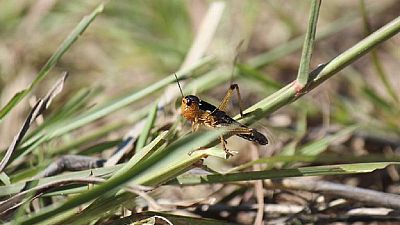 A number of African countries are suffering the impact of insect invasions that are threatening food production and livestock production.

To the east, Ethiopia is battling locust invasion whiles further south, Malawi is dealing with tsetse fly attack on local populations after elephants were relocated from a wildlife reserve.

Ethiopia and the desert locust invasion

Ethiopia is working to contain a locust invasion that according to reports affects about four regions of the Horn of Africa nation. The affected regions are Afar, Oromia, Somalia and Amhara regions.

The swarms are likely to invade wider areas and cause significant crop, pasture and forest cover losses in eastern Ethiopia.

Authorities resorted to the use of aerial spraying of large fields to control the spread and damage caused by the insects believed to be migratory in nature.

The privately-owned Addis Standard portal wrote in a report: “Migrating from Yemen through Djibouti and Somaliland, Desert Locust swarms entered Ethiopia and settled in the breeding sites in Afar, Amhara, Oromia and Somalia regions.

“The swarms have produced hopper bands that have covered more than 174 square kilometer (in 56 Woredas and 1 085 kebeles) and are consuming approximately 8700 metric tons of green vegetation every day. It is estimated that about 30 million hoppers can land on one-kilometer square area.”

Zebdewos Salato, Director of Plant Protection in the Ministry of Agriculture is quoted to have cautioned thus: “The swarms are likely to invade wider areas and cause significant crop, pasture and forest cover losses in eastern Ethiopia.”

The Organization called on all countries to monitor the field conditions by mounting regular ground surveys and undertaking the necessary control measures whenever infestations were detected.

The relocation of hundreds of elephants to Malawi’s largest wildlife reserve was meant to be a sign of hope and renewal in this southern African nation. Then nearby residents began falling ill.

The cause of the headaches, weakness and pain were trypanosomes, tiny parasites spread by the bite of the tsetste fly — a companion of the elephants. Trypanosomiasis, or sleeping sickness, is the result.

Local families described the toll the disease can take.

“I feel too weak,” said Chiomba Njati, who was still recovering after a week in the hospital. He said he was bitten while farming near the wildlife reserve. “I cannot even carry a hoe and farm. The home is lacking food and other important things because it is my wife doing everything on her own. This is so worrying.”

Authorities said the Nkhotakota wildlife reserve has seen a surge in tsetse fly numbers since around 2015 when the elephants and other game animals were reintroduced.

The local hospital said it did not have a number of sleeping sickness cases. One community resident, Group Village Ngondo, recalled at least five deaths from the disease.

The World Health Organization says sleeping sickness is endemic in 36 countries in sub-Saharan Africa but cases have been dropping. Last year just under 1,000 cases were recorded, a new low. The majority of cases are reported in Congo.

The disease is “notoriously difficult to treat” with drugs and easier to treat when caught early, WHO says. The health agency says it is usually fatal when untreated as the parasite moves into the central nervous system and eventually can cause seizures and coma.