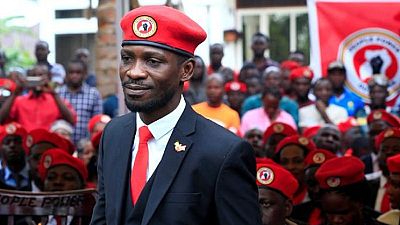 Uganda’s popular opposition lawmaker and presidential hopeful Bobi Wine has denounced the government’s banning of civilian use of red berets, a symbol of his “People Power” movement.

The government this month gazetted the red beret and other pieces of military wear as “property of the state.” It warned people who wear or sell them that they would be prosecuted under military law, which can lead to a life sentence.

“This beret ban is a sham. It is a blatant attempt to suffocate a successful threat to the autocratic status quo,” said the 37-year old Wine who hopes to oust longtime President Yoweri Museveni.

People Power is more than a red beret, we are bigger than our symbol.

“But People Power is more than a red beret, we are bigger than our symbol. We are a booming political movement fighting for the future of Uganda and we will continue our struggle for democracy,” Wine’s statement continued.

Since he became a legislator in 2017, Bobi Wine, whose real name is Robert Kyagulanyi, has rattled Ugandan authorities who see him as a formidable threat to end Museveni’s more than three decades in power.

Wine has amassed a large support base especially among young Ugandans who have been wooed by his bold criticism of Museveni, sometimes delivered in his lyrics.

Authorities have responded by clamping down on his supporters, jailing some. Wine’s rallies have been broken up with tear gas and live rounds.

Last year he was beaten as he campaigned in a parliamentary by-election and had to seek treatment in the United States.

Uganda’s next presidential elections are due to be held early 2021. Museveni, president since 1986, is widely expected to stand. While Museveni has not officially declared his intention to run for re-election but top organs of his ruling National Resistance Movement (NRM) party have endorsed him as their flagbearer.