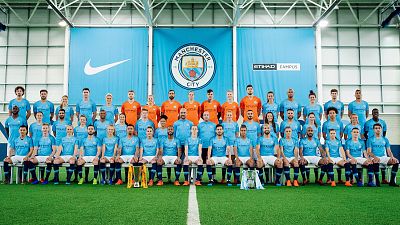 Algeria’s Riyad Mahrez is one of Africa’s top players that are part of the historic Manchester City squad which has been named as the first team to have spent more than 1 million euros to assemble their squad.

Data from the Swiss-based CIES Football Observatory showed that City have spent $1.1 billion (1.014 billion euros) on their current squad.

Mahrez himself moved to Manchester City from Leicester City for $72m.

French champions Paris St-Germain were second having also spent a little over $1 billion (913 million euros) and Spain’s Real Madrid were third with $992m.

Manchester United at $826m have the second-most expensive squad in the Premier League followed by Champions League winners Liverpool at $702m.

The Premier League average was $379m, it said.

At the other end of the scale, Germany’s Paderborn had the cheapest squad in the study ($4.3m), which looked at teams from the English, German, Italian, French and Spanish top flights.

Adebayor’s move to City in 2009 for a fee believed to be about £25 million, made him one of Africa’s most expensive transfers at the time.