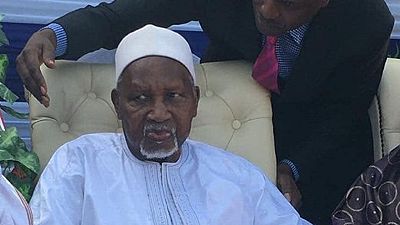 The Gambia of Thursday held a national funeral for its first president Dawda Jawara who died on Wednesday, August 27, at the age of 95.

The funeral was held in the National Assembly in the presence of lawmakers and other high ranking officials of state including the Chief Justice.

Thousands of citizens from across the country also thronged the premises as the remains of the former leader was brought into the National Assembly for prayers and other funeral routines.

The national flag was draped around his casket along with his doctoral gowns. Jawara was a trained veterinary doctor.

The event ended with a 21-gun salute, the remains have been taken to the King Fahad mosque for final religious rites before it is returned to the National Assembly premises for burial.

A book of condolence has since been opened with President Adama Barrow being one of the early signatories. Many Gambians online have also celebrated the contributions of the late leader.

Flags are expected to at half-mast till September 2. A number of citizens are already making calls for a significant national monument to be named after him, with the Banjul International Airport, being a major proposition.

#Gambia all standing. Family pays last respect before casket is taken out of chamber.

A veterinarian by training, Jawara in 1959 founded the Protectorate People’s Party, later rechristened the People’s Progressive Party, which emerged as the dominant political force following independence from Britain in 1965.

He served as prime minister from 1962-70, as the newly-independent Gambia, a sliver of land along the banks of the Gambia River and Atlantic coast surrounded by Senegal, remained a constitutional monarchy under Queen Elizabeth II.

In 1970, Gambia adopted a republican constitution by referendum and Jawara was elected its first president.

Over the next two decades, he presided over a multi-party political system in a region plagued by authoritarian rule and frequent civil unrest.