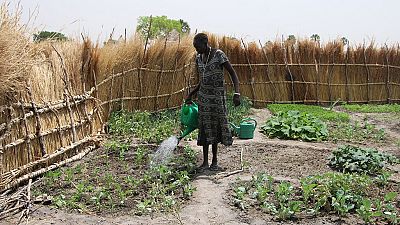 South Sudanese in Marial Ajith community in northwestern South Sudan, an area very fertile and has plenty of rivers and basins are starting to farm again after years of war that destroyed their farms.

According to United Nation’s organization, FAO agricultural production used to be high and vegetables were exported from the region to the rest of South Sudan. Years of conflict, however, made this area a dangerous place to harvest the land; many people left their homes and lost their livelihoods. Insecurity and violence had turned this place into a deeply food insecure area, reliant on humanitarian aid.

Adut Akuei like many others has returned to the area have been fighting malnutrition, especially among the children. In late 2018, FAO, with funding of the Governments of the Netherlands and Norway, started helping mothers enhance and diversify the diets of their children to fight malnutrition. They provided the community with vegetable seeds, agricultural tools (like treadle pumps for irrigation), information and training to grow different types of vegetables and crops for their consumption.

“Before I learnt how to farm, I used to cut grass and fetch firewood, transporting it to the market to sell,” said Adut Akuei, adding “Now we grow all what we need and don’t need to walk for one hour to the market anymore.”

Women’s skills in farming as a business have improved, and so has their income, filling the current local production gap and demand for vegetables, which were mainly imported from neighbouring countries before.The communities are hopeful that the signed peace agreement will finally bring tangible peace to the nation. This will allow the progress made to continue and open the doors to upscaling the project to other locations in need.