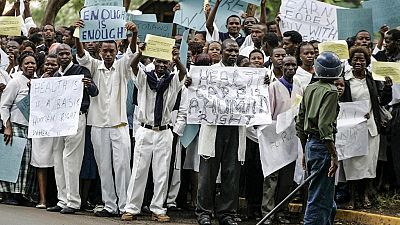 Zimbabwe’s teachers and doctors, who make up the bulk of the public service, on Monday rejected the government’s wage offer, with medical personnel threatening a strike if their demand to have their wages benchmarked in the U.S. dollar is not met.

The government proposed a 60% pay increase for doctors, while offering a 76% raise for the rest of the civil service, in a bid to avert crippling strikes by state workers.

But in separate statements, the main unions representing the doctors and the teachers said they rejected the government offers, which would see the lowest paid worker earning 1,023 Zimbabwe dollars ($98.75) a month.

We maintain our request to have our earnings, which were previously pegged in United States dollars, be paid at the prevailing inter-bank rate.

The Apex Council, which is an umbrella group for public sector unions, has demanded the equivalent of $475 for the lowest paid government worker.

In a letter sent to the government on Monday, the Zimbabwe Hospital Doctors Association (ZHDA) said its members could no longer afford to report for duty amid surging inflation and continued deterioration of Zimbabwe’s economy.

“We maintain our request to have our earnings, which were previously pegged in United States dollars, be paid at the prevailing inter-bank rate,” the ZHDA said. adding that they would strike on September 3 if their demands were not met.

The Zimbabwe Teachers Association (Zimta), the biggest single union of public workers with about 44,000 members, also said the government’s wage offer was unacceptable, but committed to further negotiations.

Hope that the economy could recover under President Emmerson Mnangagwa, who replaced the long-ruling Robert Mugabe in a November 2017 coup, has made way for widespread anger over the slow pace of reforms and recovery.

Last week, the police banned a series of protests called by the opposition in the country’s major cities. They used teargas, baton sticks and water cannon to disperse demonstrators and arresting scores of protesters.

Ten leaders of a smaller teachers’ union were arrested on Friday along with their lawyer when they tried to petition the minister of finance for higher wages. The police on Thursday also arrested Amos Chibaya, a senior MDC official, on charges that he failed to stop the banned Harare protests.

Chibaya was released on 400 Zimbabwe dollar bail by a Harare magistrate on Monday. He also faces a separate subversion charge over protests staged in January 2019 over a sharp fuel price increase.